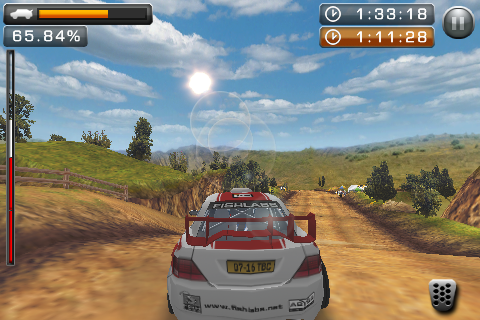 FishLabs is bringing the highly rated mobile title Rally Master Pro, which we determined to be the best mobile game of 2008, to the iPhone and iPod touch.

The original mobile title has some of the best 3D graphics ever seen on a typical handset.  The iPhone version, as FishLabs indicates, takes things to a whole new level with 4x the poly count of the original and enhanced particle effects and dynamic lighting.

Depending on the track surface and weather, a variety of dust, spray, and even dirt particles will be generated for each individual tire. The various kinds of particles act quite differently. On dry, dusty tracks the car leaves a massive cloud of dust while racing through a forest on a rainy day you can literrally see the mud flying.
….
Thanks to the high-powered 3D chips (OpenGL graphics acceleration) in the iPhone, we can light the vehicle in a variety of ways, depending on the weather: with lots of light and shadows when it’s sunny, diffuse when the sky is overcast, and correspondingly dim in rain and storm.

The iPhone release will include 27 courses and weather effects for sun, rain, and snow as well as options for tilt or touch (analog or digital) controls. 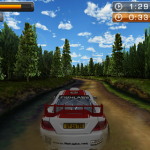 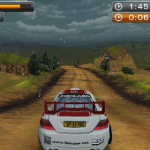 FishLabs was kind enough to provide us with a pre-release build of the iPhone version of Rally Master Pro to play around with and share a glimpse with our readers.

The developers emphasis that what you see above is indeed a pre-release with unfinalized controls, physics, and sound.  As such, I’ll refrain from critiquing the gameplay, but I can say that I’ve had a rather enjoyable time putting the game through its paces.  Some parts of the various courses really take me back to days of spending hours in front of Sega Rally on the Saturn (which, in case you’ve not personally had the pleasure, is a very good thing).

What I’ve seen so far puts a rather optimistic light on the likelihood that the iPhone version will indeed go well beyond the mobile title.