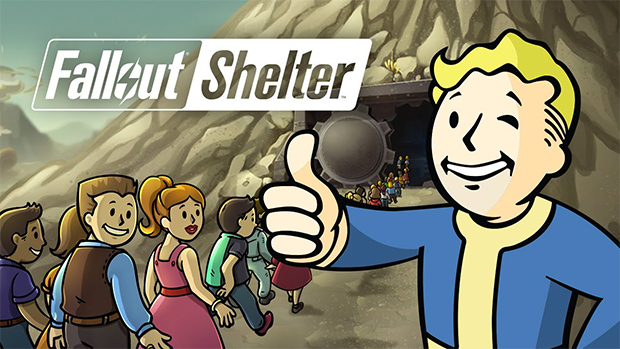 Fallout 4 has a lot of people excited, including me. With the recent announcement from Bethesda that Fallout 4 is set to be released this fall, gamers are ready for some more post apocalyptic action. In an unusual move, the console game announcement also came with a bonus announcement. Bethesda launched a mobile game called Fallout Shelter on iPhone, in which you play a vault overseer and are tasked with looking after the ‘pip-boy’ inspired inhabitants of your own fallout shelter. 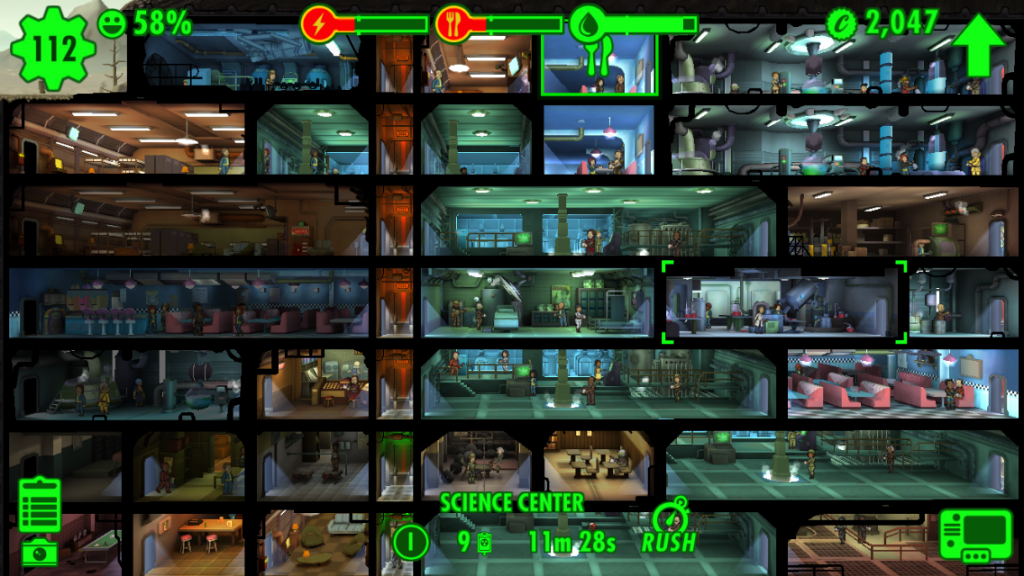 The game is very much like Tiny Tower or No Zombies Allowed, in that you have to build various ‘rooms’ that supply, power, food, water, storage and relaxation to an ever growing population. Each inhabitant or ‘dweller’ has a set of seven special stats from strength to luck. Different attributes are suited to different rooms. Strong dwellers work best in the power stations, whereas the more intelligent characters are happier in the medical or scientific rooms. If ‘dwellers’ are placed in the bedrooms, they have a chance of procreation and if dwellers work in rooms that match their stats they become happier and raise the moral of the whole shelter. Later rooms aim to improve the special stats and you are able to send people to the bar to improve their charisma, get them on a treadmill to increase their endurance or even have them play cards to improve their luck. 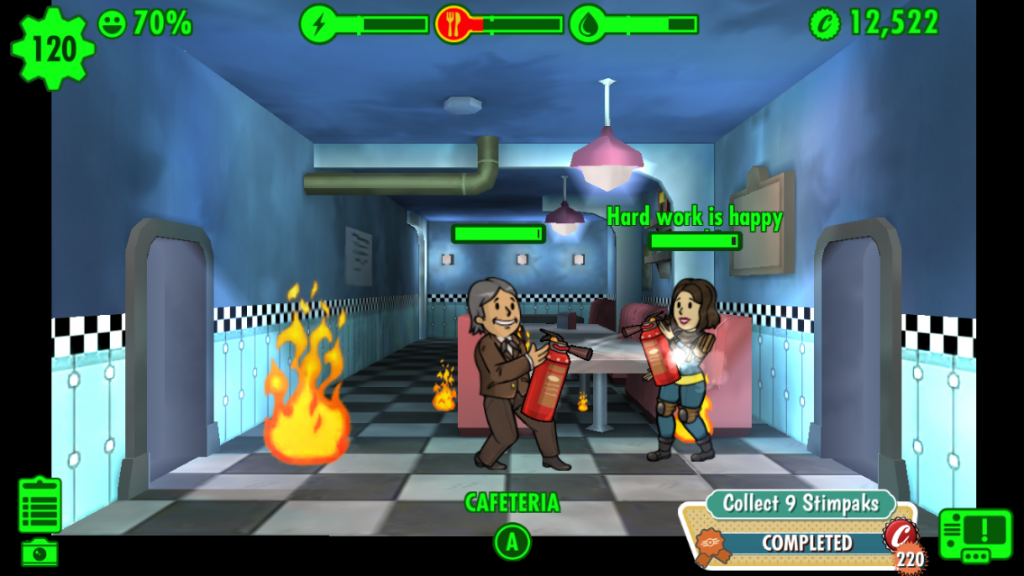 I have spent the last three weeks constantly playing this game and I love it. At a recent count, I had nearly 130 dwellers all in custom outfits carrying some serious weaponry. New clothes and weapons can be gathered by sending some people out into the wasteland for hours at a time, or by opening special lunch boxes. Every lunch box has a set of cards that range from additional caps (money) to bespoke dwellers. You are awarded lunch boxes for achieving various tasks, such as gathering resources or sending people outside. Lunch boxes are also given out for playing everyday for a week and should you get in trouble, you can buy them as in-app purchases. I found myself spending nearly £10 on lunch boxes after a series of failed ‘rush’ events, when I tried to force my dwellers to create more resources. The ensuing ‘bug attack’ and fires soon killed many of my dwellers and in a panic I bought my way out of it. 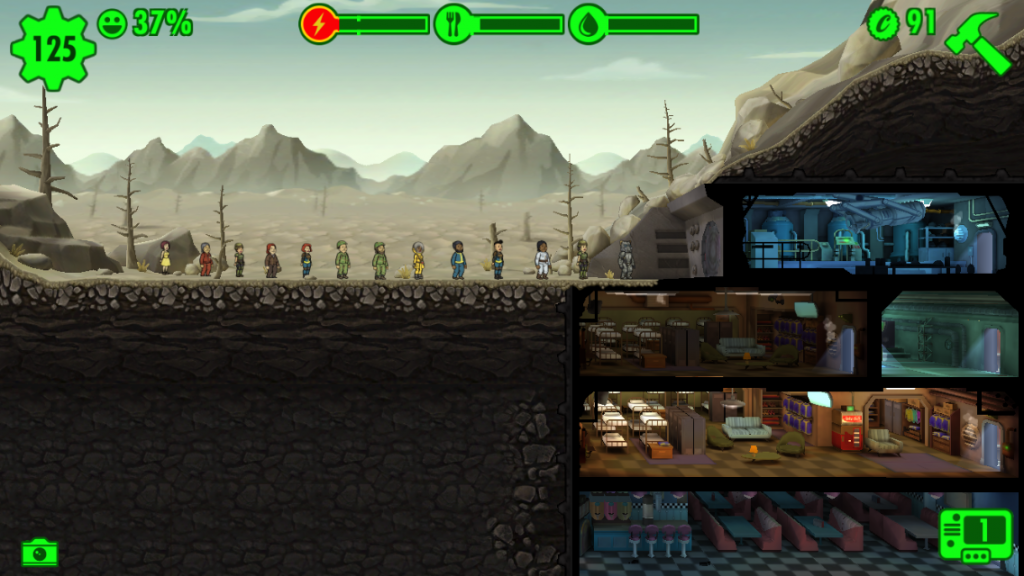 Despite, my loss of self control in the finance department, I don’t consider it a waste of money, considering how many hours I have put into the game. I would like to see the game extended in future updates and have the addition of more rooms, mutants, robots and all of the other things that make the Fallout universe so eclectic. 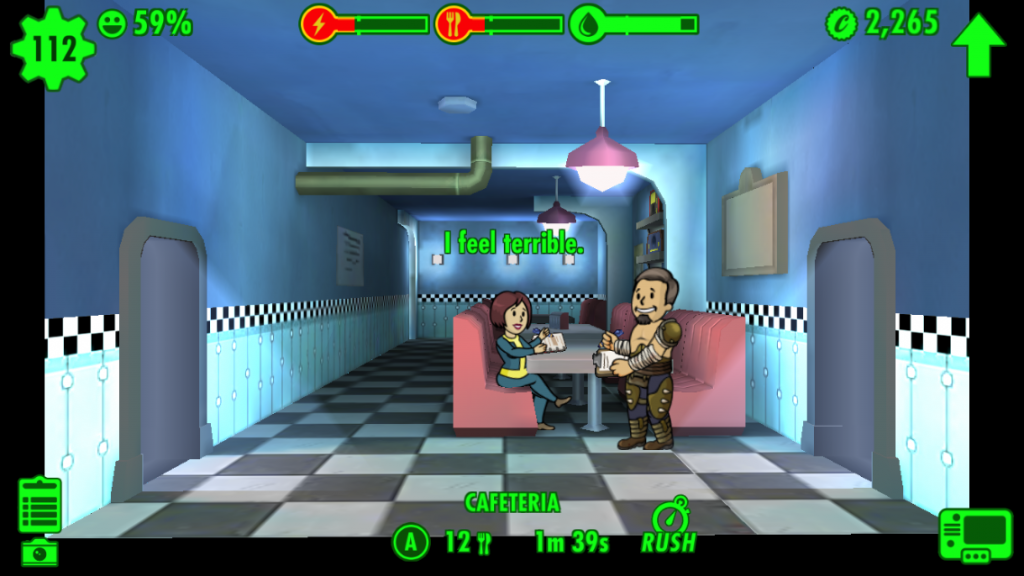 If you are a fan of the Fallout series or just enjoy persistent games such as the Tiny Tower or ‘sims’, this is a great game that will keep you going back again and again. After three weeks, I realised I was getting addicted when I found myself checking it many times a day and even starting a new vault, so I could test how flexible the in-breading rules were. Before I was consumed by the darkness of my own personality, I decided to ceremonially send all 127 dwellers out into the wastelands, to find their own destiny. As I sat watching the lights slowly turn off in my 12 storey underground bunker I almost shed a tear.

Three days later, i went back…