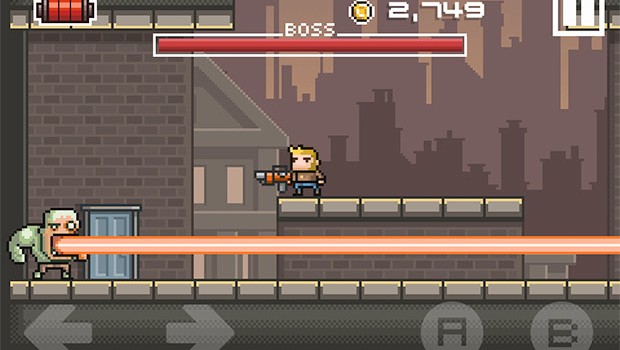 Hot after the success of ‘League of Evil’ Ravenous Games released Random Heroes. Random Heros is a retro inspired platform game, in the same vein as James Pond, but with the same cute pixel look and speed of their previous game.

The story of the game is unclear as you are plunged into a world with weapon wielding cyborg zombies, hellish minions and man eating slugs. The player must navigate their way from the start to a door at the end of the level. The game is fast paced and the restart is near instantaneous, which is very similar to League of Evil. 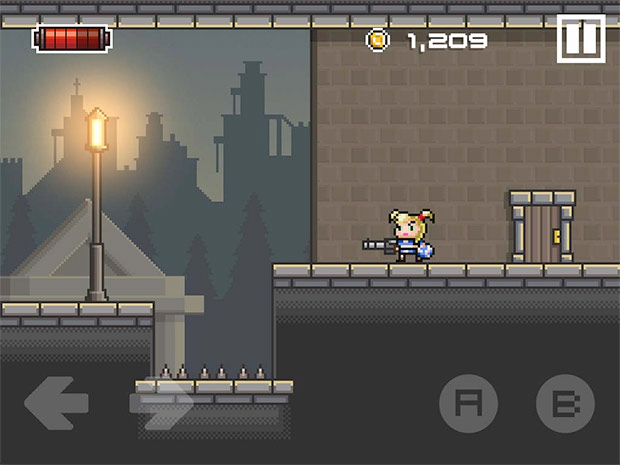 Enemies die is a splash of coins which can be collected to upgrade your weapons and costumes. It is here where the fun begins. Using the default player and the simple pistol the game is hard and unsatisfying but once you have traded up to an AK47 wielding Robocop it all becomes a lot more fun. There are a tonne of characters to choose from all more silly than the last; Rambo, Abe Lincoln, Neo, Clown, Cheerleader, they are all here. Each character has their own merits such as increased speed or agility but the only trait that seems to have any major difference is the damage as this dictates how many hits you can take before exploding into a cloud of pixels. Weapons range from standard pistols, shotguns and rifles to more elaborate missile launchers and futuristic pulse rifles. Whilst the shotgun feels different to the chain gun I found myself using the automatic weapons more due to their quicker fire rate.

You can play to earn coins or buy coin packs to upgrade quicker but it never feels forced or necessary to buy more.futuristic pulse rifles. Whilst the shotgun feels different to the chain gun I found myself using the automatic weapons more due to their quicker fire rate. 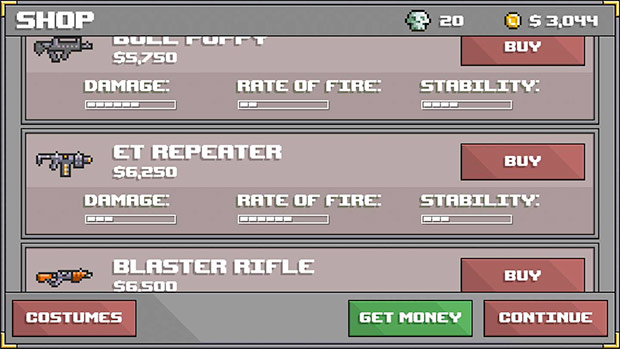 You can play to earn coins or buy coin packs to upgrade quicker but it never feels forced or necessary to buy more.

The controls use a simple left and right button along with a shoot and jump. The controls are responsive allowing you to navigate many levels in one sitting.

The levels take you from grimey city streets to green forests and the level design is fantastic as each simple level has multiple routes to the exit which encourages some re-playability. At the end of each level is a boss battle that is never too taxing but might take two or three times to beat. Sadly, my game was cut short on the last level as on of the lifts seem to be missing but hopefully a reboot will sort this. 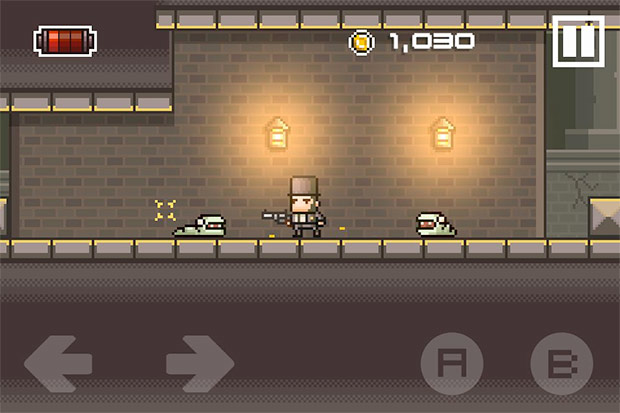 Overall, random Heroes is a fun platform shooter that harks back to the olden days of gaming when CJ’s elephant antics was fun and James Pond was a AAA title. Whilst the lack of any real narrative is a shame, the customization of your player and weapon will keep you playing. The game can be beat in 3-4 hours so if you have some time and just want a throw a way game, this is a lot of fun!