When I think of Mechs, I don’t think of the MechWarrior of old as I used to. Instead, a more immediate memory comes to mind– that very awesome scene from Matrix: Revolutions where the Zion Mech platoon were (albeit briefly) holding off the entire squid machine onslaught. Maybe it’s the John Woo fanatic in me, but I’ve always wanted to play an ambidextrous Mech; both weapons firing all over the place at a horde of surrounding enemies. It seems Brisk Mobile had similar thoughts, as 2360: Battle for Cydonia [App Store] captures that dual-wielding mechanical mayhem brilliantly.

2360: Battle for Cydonia differentiates itself from similar games with its great use of the iPhone’s multitouch feature– allowing you to navigate the battlefield and shoot both weapons at foes from different directions all at the same time. It can sometimes be an exercise in dexterity, but there’s something too damn cool about holding off forces from two flanks with a range of machine guns, shotguns, rockets and eventually even high powered lasers. It’s effortless to orchestrate your one-man-war too; you direct your Mech by dragging your finger around and fire your weapons by tapping on enemies, your Mech swivelling its two arms where needed to direct its barrage. 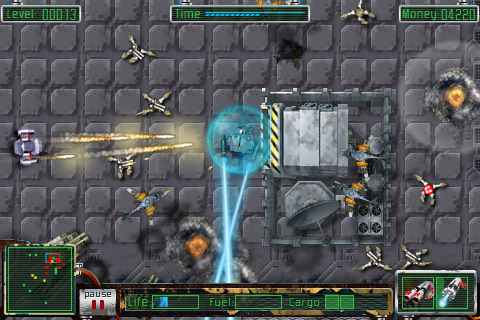 As the story goes in 2360: Battle for Cydonia, you are part of a rebellion fighting to claim their fair share of the Mars colonization. The story isn’t anything revelatory, but it’s definitely appreciated as a means of tying together the various missions and give them a sense of purpose– something that we were critical of in our recent review of a similar title, Heavy Mach 2. There are 21 missions on offer, some of which are quite lengthy and challenging, even on the normal difficulty level. Missions aren’t just your run-of-the-mill collect this object, destroy this target– though there is a fair bit of that, 2360: Battle for Cydonia also throws escort and base-defence into the mix, as well as a few others to keep things interesting. In order to keep up with the enemy’s firepower, you’ll have to invest in a sizeable range of upgrades for your Mech; from the traditional armour, speed and weapon upgrades, to more interesting upgrades such as one that improves your mech’s swivel action, or the various auto-weapons on offer that can target tank shells. 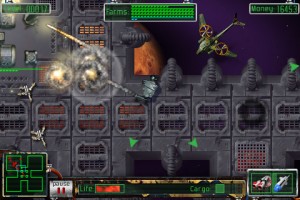 It’s fortunate that 2360: Battle for Cydonia looks and sounds great too. All the artwork is crisp and detailed, though for the first half of the game you will be encountering a number of similar-looking spider and tank enemies. Thankfully, the latter half really showcases Brisk Mobile’s artistic efforts though, with a number of terrific-looking flying and Mech enemies thrown at you too to turn up the heat. The weapon effects are very satisfying, each distinguishable on your mech itself, and each very capable of leaving a trail of impressive explosions. There’s really only one area where 2360: Battle for Cydonia seems to drop the ball, and that’s in the environment art; the same grey floor texture seemingly repeated each level, and only improved upon in the latter missions. It’s no big deal though, and it can help to identify your foes quicker. Aurally, 2360: Battle for Cydonia delivers a lot of punch for each weapon, and has a good selection of energetic music to keep you engaged.

If you’re a fan of Mech or tank combat, then 2360: Battle for Cydonia should really be a no-brainer. There’s a couple of hours worth of content to get through, and it’s not for the faint of heart either. 2360: Battle for Cydonia does a great job in keeping its Mech combat fresh, be it through a huge range of interesting weapons and items to unlock, or its engaging mission objectives, and will undoubtedly be a staple on our devices for a while to come.

Be sure to check out the trailer above and our 2360: Battle for Cydonia discussion thread where impressions from our readers have been overwhelmingly positive and the developer has already indicated at an upcoming survival mode.