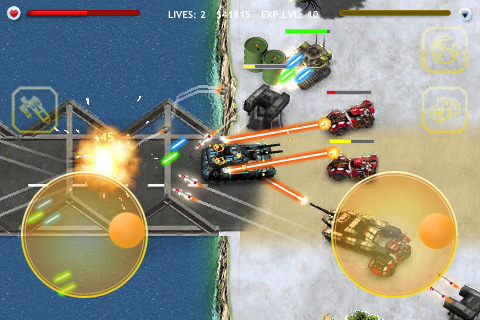 After successfully defending a key research facility from invading aliens in “Team Alpha” you have been promoted, and are now in charge of the army’s most advanced tank prototype. Your mission? Free the Earth of the evil invaders, which are going to throw their best military technology at you. Can you do it and save the planet?

The developer’s gameplay video shows the action which can get intense with tons of enemies on screen:

The game is well controlled using left and right dual thumb sticks. The current version of the game spans 7 different missions/levels each with a specific goal. Kills award cash which can be used to upgrade your vehicle’s armor, weaponry and more. Health and power-ups are also strewn across the levels giving items such as helper vehicles or air strikes. The game has a great classic arcade feel to it and you really should download while you can.

Project Phoenix is free for a “very, very” limited time. The developer plans on added more levels and features to the game over time.