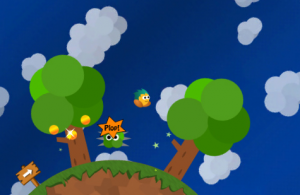 A few weeks ago, TouchFoo teased us with a gravity defying trailer promising a fun, innovative, and action-packed platformer game for the iPhone. They have since fully delivered on that promise with the release of Soosiz [App Store].

The basic gameplay found in Soosiz is that of a traditional platformer, where you run and jump your way past obstacles and enemies while collecting coins and rescuing your buddies along the way. Some enemies can be dispatched by simply jumping on their heads, while others need to be avoided completely. As is typical in platformers, timing and dodging become important skills in later levels. Rescuing buddies can give you additional powers (jumping higher, running faster) and once you have 100 coins, you can trigger a brief indestructible power-up allowing you to easily plow through enemies. Soosiz is very easily controlled with simple left/right virtual buttons and a jump button. Holding the jump button longer makes you jump higher. 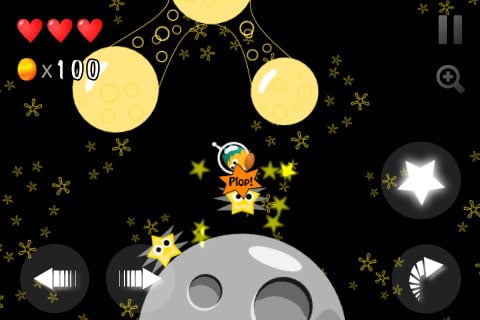 The big twist to the game is its gravity-changing mechanic. When jumping to a platform above you, the entire world spins around and up becomes down. While this all seems like it might just be a novel gimmick, Touch Foo manages to utilize it fully across Soosiz’s 7 worlds and 65 levels. The gravity experience is truly an integral part of the game, and not simply a tacked on afterthought. Triggering this gravity manipulation simply requires you to jump onto another platform, and becomes second nature very quickly.

The game was in development for 6 months, and it really shows in Soosiz’s excellent level designs. Soosiz manages to constantly introduce new elements and obstacles to keep the game fresh and interesting across its 7 worlds. Each world carries its own themes (space, underwater, snow, etc…) as well as unique elements. Boss battles at the end of each world are also varied throughout.

You are given 3 lives at the beginning of each level, and can replay any level you’ve already unlocked. For me, the game managed to be stay progressively challenging, interesting, and fun without being frustrating, even though many of the levels took multiple attempts. Fortunately, your running coin count is not lost when you die, allowing you to continue to build up coins for the indestructible power-up if you find yourself struggling with a particular level. Meanwhile, gold, silver and bronze achievements per level, as well as the many secret areas should offer plenty of challenge for overachievers.

Graphically, the game carries a rather simple cartoon style but still retains its own charm. The game’s music, however, feels strangely out of place throughout (additional music in this video). There’s also an inexplicable use of the Up on the Housetop Christmas carol for the level win screens. While the music certainly isn’t a deal breaker, it does reduce some of the game’s immersion.

Regardless, the game is otherwise incredibly well executed with excellent controls, has a ton of content and is a lot of fun. We highly recommend it.