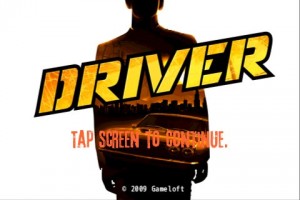 When Driver [App Store] was originally released for the Playstation and PC way back in 1999, it was heralded by critics as a genuinely fun, challenging racing game. With the intense cop-chases, gang-centric story, and open-world exploration, Driver could be most easily described as “Grand Theft Auto without the on-foot parts.” Flash forward to 2009, and Gameloft has just released their updated version of the game for the iPhone and iPod Touch via the App Store. Are slightly improved graphics, the addition of a much more tolerable difficulty level, and well-thought-out controls enough to make Driver a viable purchase for gamers, even 10 years later?

In Driver, you play as Tanner, a detective from New York who has been assigned a dangerous task: going undercover with the gangs that make up the criminal underbelly of New York, Los Angeles, Miami, and San Francisco. The “Undercover” mode serves as the single player campaign in the game and consists of about 40 missions. Missions do a good job of providing some decent variety in their structure; one minute you’ll be attempting to keep up with a speedboat as it makes for an island hideout, the next you’ll find yourself ramming into restaurants with the goal of busting up their glass fronts. 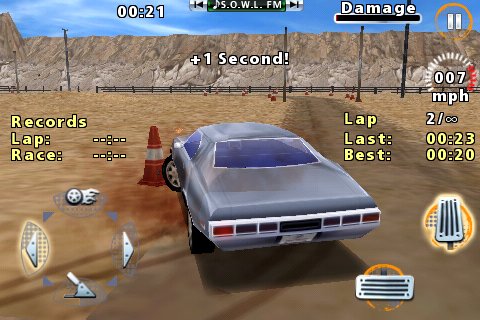 Driver isn’t all about the story mode. There are numerous minigames, referred to as “Driving Games,” on the game’s main menu. In “Pursuit” you’ll be tasked with chasing down another vehicle and dealing enough damage to take them out as quickly as possible. In “Getaway” you’ll switch roles, attempting to evade and lose the trail of the police. Other minigames failed to catch my interest, like “Cross Town Checkpoint” or “Trailblazer”, the latter of which involves randomly driving around knocking down 100 traffic cones.

Despite the weak first half of the “Driving Games” list, the second half of the minigame collection is much better and includes several fun games, my favorite of which being “Survival” mode. In Survival, players are brutally attacked by an unending legion of cop cars. The utmost skill in evasion techniques will be required in order to even stand a chance at lasting over a minute in this mode, and it makes for an extremely compacted session of what I consider to be the best parts of Driver. I also loved “Dirt Track” (a rally-style time trial game) and “Carnage” (an extremely fun mode that’s very similar to the “crash” mode in the Burnout series). 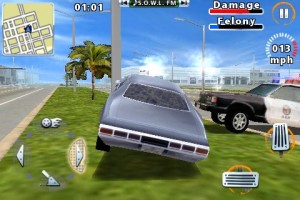 Visually, Driver doesn’t really hold up to other racing games on the App Store, but it comes close. The dated, PS1-era graphics benefited tremendously from the face lift that Gameloft gave them in this port, but the fact remains that there are better looking games on this platform. The worst part about Driver’s visual style is undoubtedly the cutscenes, which are weirdly dark in an attempt to hide the unimpressive human 3D models in the game. At first, the constant use of darkness and shadows seems cool and stylish, but I quickly got tired of not being able to see anything in the cutscenes, losing almost all of my desire to watch them.

The audio in Driver is similarly disappointing, with what seems like only a few musical tracks that play themselves to death on your car’s in-game radio, only interrupted by even fewer lines from the radio DJs. You’ll hear the same tired jokes three-dozen times before you complete the full story mode in Driver, and if you’re like me, you’ll eventually just give up and turn off the noise altogether. 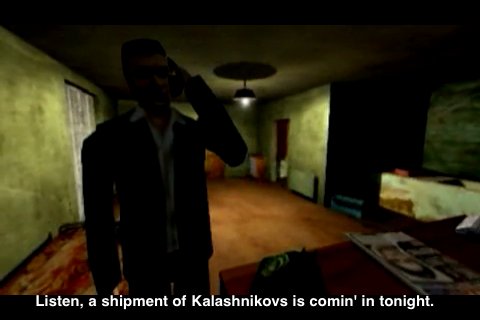 The most important part (arguably) of a vehicle-based game on the iPhone/iPod Touch are the controls. While I usually prefer accelerometer controls in such games (which Driver does indeed offer), I have to say that the on-screen touch controls that are set as the default control method in this game are some of the best on the platform. Trying them out for yourself is the best way to see what I mean by this, but the D-pad layout simply works; you’ll forget you’re playing on a device without any real, physical buttons to speak of.

In what may sound like a flaw but is actually a feature, the cop A.I. in Driver is completely nonsensical. Simultaneously vicious like wolves and stupid like sheep, police officers can be witnessed doing things worthy of national media attention about every 5 seconds in this game. The cops of Driver do not believe in the right to pull over and surrender oneself to the law; in their minds, the only way to stop crime is to ram into it repeatedly until it explodes.

Cops will work together in intelligent, inhuman fashion to slam you into a building at full speed, but when you put any sort of physical object in between yourself and them, prepare for fireworks. Driving around obstacles is just not an option for the fine officers in Driver. Instead, they will drive at full speed into civilians, trees, and even units of their own force in a desperate attempt to crush you with pure inertia. This makes for some of the most hilarious moments that I’ve had with a game in recent times, and I honestly think that Driver is a much better game for it.

There is no option to view replays in this version of Driver, and there is no multiplayer. If these two things were to be fixed in a future update, I would be absolutely in love with it, but even without that, this is an easy recommendation. The story mode is entertaining, but it’s the great controls and supremely fun minigames that make Driver worth it. The game may have its flaws, but Gameloft has done a great job in making what could have been a quick and dirty port into a legitimately fun piece of software.