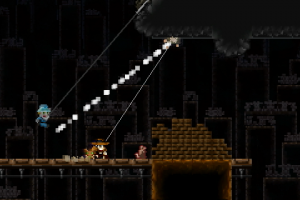 One of our very favorite iPhone games — one that we come back to and actually play “for fun” (perish the thought!) — is Rocketcat Games’ Hook Champ [App Store], which we reviewed back in October.  We discussed the game in detail with Rocketcat’s own Kepa Auwae in TouchArcade Podcast #9. He gave us a look at what went into the making of the title and assured us that Rocketcat intends to keep the game very much alive down the road, with updates and enhancements.

Fans of the title will be pleased to hear that the first update since our discussion with Kepa (and the third update to the game since its release) has just hit the App Store.

Features as listed by the developer:

What’s more, Rocketcat tells us that Update 4 should be available around the end of this month and will feature a number of new, more causal levels featuring John Gore of Minigore, who will shoot his enemies Bionic Commando-style. A new “Duel System” will also appear in the next update.

Have a look at the game in action. (Video is prior to Update 3)

As we said in our review, Hook Champ is an absolutely fantastic game that all fans of retro styled sidescrollers should own. If you’ve not added this one to your game library as yet, now’s the perfect time. At least give the free, lite version [App Store] a swing.

And hats off to Rocketcat Games for keeping this one going strong.