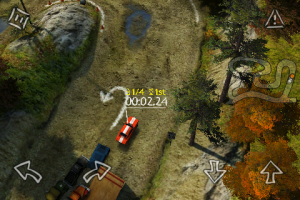 While I have been completely sucked in to hardcore racing simulators in the past, there’s nothing I like more in racing games than ridiculous drifting and jumps– Lots of jumps. Thankfully, developer Pixelbite seems to share a similar love for these kinds of racing games from looking at their recently released Raging Thunder 2 and the upcoming Deliverace. 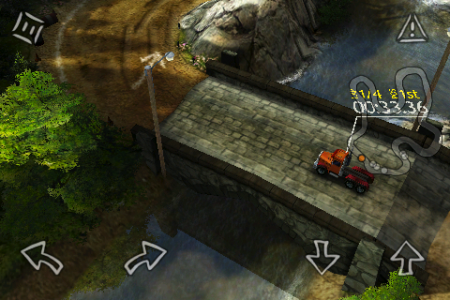 Deliverace is a top down racing game that seems to be what you would get if you were looking to cross the classic arcade game Super Off Road and the late 70’s/early 80’s TV series “The Dukes of Hazzard”. Racing through the various included tracks (with some unlockable by beating earlier tracks) amounts to keeping your finger firmly mashed on the gas, and drifting through each corner while hitting as many jumps as possible.
Almost every conceivable control option is included, from a set of right/left buttons seen in the video below, as well tilt controls, and two different kinds of virtual steering wheels. Six different cars are in-game as well that all handle differently, ranging from a pick up truck to a hummer and even a semi truck.

In the preview build I’ve been playing, there are three different game types: Standard races against AI opponents, a time trial, and delivery mode where you need to ferry cargo around a map as quickly as possible. Also, the game features a multiplayer mode, and although it is grayed out in this version, there is an menu option for internet multiplayer.

The craziest thing about Deliverace is this preview build is chock full of warnings about how it’s an early version with bugs and placeholder art, but even in its current state, it’s one of the coolest looking top down racing games I’ve ever played. Deliverace is still in development, and I’m really looking forward to playing a finalized version of the game.