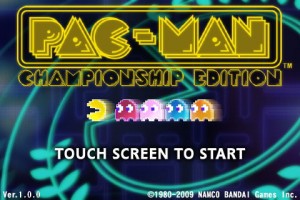 Namco is finally delivering Pac Man: Championship Edition to the iPhone this Thursday, December 10th. Pac Man C.E. was a new Pac Man game that was created by Tōru Iwatani, the original creator of Pac Man. The game had been exclusive to the Xbox Live Arcade until recently, and will finally grace the App Store.

Pac Man C.E. carries forward the same basic concept and gameplay of the original but spices up the play enormously, making it an action-packed race against the clock:

The game is bound by a time limit in which the player must score as many points as possible, and the game ends when this time limit is reached or the player runs out of lives. The game speeds up as the player scores more points, and slows down slightly when the player loses a life.
….
Each maze is divided into two halves. Eating all the dots in one half of the maze causes a bonus fruit to appear on the other side, and eating the fruit causes a new maze to appear in the original half. In most cases, the maze patterns vary significantly throughout the game and some change over time. 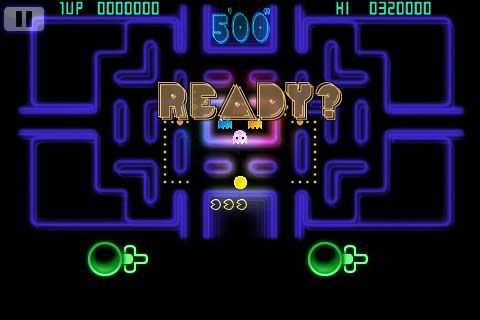 We’ve managed to spend a little time with the game already and already think it plays great. The make or break feature on the iPhone is, of course, the control scheme. Namco seems to have put a lot of thought into the controls for such a fast action game and offer 4 different types: 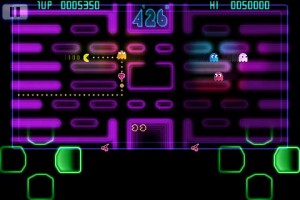 Each control scheme seems to make sense in its own way. The presents of a dual d-pad, for example, allows you to perform quick turns as the accuracy of tapping one pad and then another is far less an issue when using two thumbs.

I stuck with the thumb swipe action which worked quite well for the most part.

This video shows the thumb swipe as well as a bit of the Directional buttons towards the end:

The basic game comes with 20 Mission levels and 5 Championship Mode levels. Namco will be offering an expansion pack which includes an additional 100 Mission Levels, 10 Championship levels, and 15 Challenge Mode courses. Unfortunately, there is no online component to the scoring.

What we can’t yet comment on is the value of the included game levels and value of the expansion pack, but the core gameplay itself seems great. Namco does seem to be holding back the bulk of the content for an in-app purchase, so the relative pricing of these elements will be key. We’ll have a full review when the game arrives on Thursday.