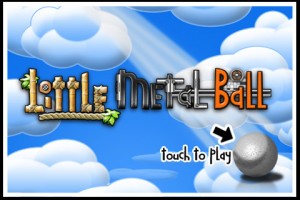 One glance at Little Metal Ball (by Debacle Software) will immediately elicit comparisons to to the ever-popular Labyrinth, but LMB sets itself apart from other games on the app store by applying its ball-rolling gameplay in a fun adventure/platformer setting. With 40 levels, controls that are tuned to perfection, and gameplay that encourages limitless high-score chasing, LMB is a great little game that demands attention.

The 40 levels included in LMB are spaced out evenly across 4 different areas (jungle, ice, fire, and “techno” themed). Progression is made by completing the first five levels in each area, which unlocks the next area. The difficulty ramps up at a pretty reasonable pace over the course of the game, but I recommend that most players play the last five levels in each area only after beating the first five in all of the areas, as these are generally much more challenging and will demand a total grasp of the game’s controls in order to get a gold ranking. 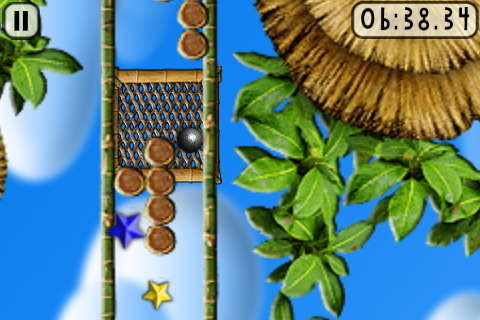 In each level in LMB, the goal is to reach a little checkered sphere that marks a finishing line of sorts. To get there, players will have to navigate narrow platforms, hard-to-avoid-bumpers, and various inanimate obstacles that threaten to send the little metal ball into the abyss. In each level, there is a time limit, but this time limit is usually quite generous. Most levels can be completed in 2-5 minutes, although there are some more difficult levels later in the game that can require either a lot of skill or a little more time. The time limit is included not intended to make players fail; it’s a way to encourage high-score chasing and improvement of best times. 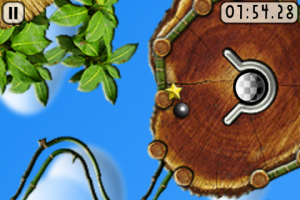 A bit of needed variety spices up LMB through the use of several powerups, all of which are activated by jumping (which can be done by tapping on the screen for a short hop or holding and releasing for a larger jump) while on a purple powerup location. Powerups include a smaller ball (which allows passage through tiny gaps), a giant ball (to roll over otherwise dangerous holes), or the activation of nearby moving platforms. Those moving platforms play a large part in some of LMB‘s levels, forcing players to react swifly to avoid oncoming obstacles while avoiding falling off the edge and tumbling to a time-consuming doom.

Every moment of LMB‘s action requires a mental balancing of the risks vs. the benefits of pursuing nearby stars. On the first run through most levels I ignored stars, collecting them only if they were directly in my path. On second playthroughs I often got more risky with my star collecting, taking dangerous jumps to get to a blue star in hopes that the few extra seconds earned would pay off in a gold medal. Aside from the usual “race” levels, there is a fair share of bonus levels in LMB that ask players to collect all of the stars in a level as quickly as possible. These levels are generally less linear than their not as “bonusy” counterparts, and do a lot to help improve the game’s pacing.

Unfortunately, there are no online leaderboards in LMB, but Debacle Software has confirmed in our forums that they (and tilt calibration, another omission from the first release) will be coming in an update. Another small complaint that users in our forums have expressed is the seemingly low-resolution of the artwork, which is otherwise fantastic.

While there are some key features that needed to be added via update to Little Metal Ball before it’s a truly great game, I have no qualms about recommending it in its current state. LMB is good, simple fun, and is great for quick pick-up-and-play sessions. For those who like Labyrinth, Little Metal Ball is a great game with a similar feel, but expanded and unique adventure-style gameplay.