Armed conflict isn’t something to be taken lightly. Man attempting to snuff out of the life of fellow man is a despicable phenomenon and one that many games have tried to replicate in lurid detail.

The same, however, cannot be said of ToonWarz. This intentionally lighthearted first-person shooter may showcase tons of heavy weaponry, hordes of bloodthirsty enemies, and plenty of daring missions from which you may never return, but it’s also notable for chirpy characters that wouldn’t look out of place in the panel of a Sunday comic.

A five-mission single player campaign has you locating items, tracking down individuals, unlocking doors with keys and so on. While these aims are hardly taxing on the gray matter, they’re a cut above most other shooters content to drop you on a map and expect you to kill indiscriminately.

Along the way you gain access to an array of firearms including sniper rifles, machine guns, and rocket launchers. These items of ordinance require ammunition, but thankfully your standard firearm has unlimited bullets so you always have some kind of offensive option.

Two control methods are on offer here: a split-screen option and dual analogue stick configuration. The first uses the left-hand side of the screen for movement and strafing, while the right-hand side is reserved for aiming and turning. Separate buttons are overlaid on the screen to facilitate inventory access, jumping and discharging your weapon.

The second option attempts to replicate the twin-stick control system employed in N.O.V.A., Minigore, and the upcoming Guerrilla Bob. 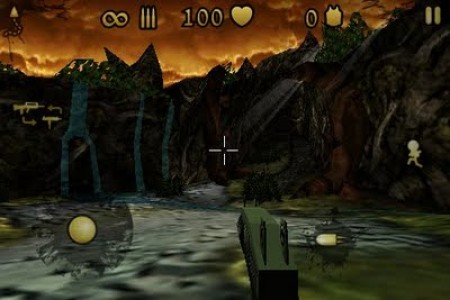 Sadly, neither choice grants satisfactory command. The various on-screen buttons are packed too closely together and during particularly fraught moments it’s all too easy to accidentally touch the wrong one.

Movement is also erratic and jumpy. Reducing the control sensitivity helps matters slightly, but even when you’ve managed to cajole the interface into offering you something that is close to a happy compromise you find that the hard work is undone by the over-use of “screen bob” to simulate the movement of your character’s head.

Realistic as it may be, this feature is especially problematic and in some cases – ours included – can induce unpleasant bouts of stomach-churning motion sickness.

Other game-breaking problems ensure that ToonWarz quickly becomes bogged down in the mud-filled trenches: enemy AI is dumb, character models are basic and the lack of mid-level checkpoints means that if you die during one of the 20+ minute single-player scenarios, you have to start again from the beginning.

It’s a shame that these fundamental issues are present because the multiplayer element of ToonWarz is great – matches are easy to organise and the lag is almost non-existent. You can even play over 3G, although wi-fi is preferable as it offers greater stability.

The biggest issue with online matches is the size of the maps: they’re far too cavernous for small groups of players.

Unfortunately, such multiplayer bravery can’t save ToonWarz from its fate. With so many shooters already swarming the iPhone battlegrounds this title is going to quickly get lost in the melee, despite offering an above-average online experience.