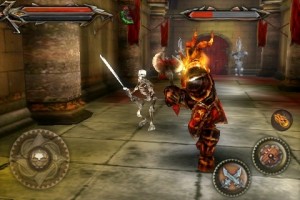 Storm Basic has released their hack and slash game Tehra Dark Warrior which we previewed just a couple of weeks ago.

Having played for about half an hour, I can’t disagree with the gist of Gabrien’s impressions. That said, I’m probably enjoying more than he is. It’s a middle-of-the road hack ‘n slash action game in a platform that has very few of them. The production values are very high, the controls are nearly flawless, there’s a real story (nothing new, but it does give some context) and the addition of spells does add some variety to the gameplay. There are some nice environments to explore (without a Gameloft-style arrow telling you exactly where you need to go) and as far as I can tell right now, there’s quite a bit of content.

The game features both magic and combat skills, leveling up, and even special visual effects on supported 3rd generation hardware:

We’ll take a more in depth look in time.