The Rumour Mill Churns out: The Apple Slate 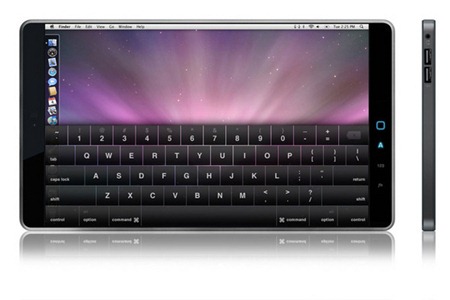 Rumours of the large form touchscreen device from Apple haven’t exactly disappeared so much as people have grown wise to the slew of gossip used to build viral interest in new hardware these days.

But it seems talk of the Apple tablet is slowly beginning to solidify. ElectricPig reports on a small slip made by Bill Keller of The New York Times (who has apparently had meetings with Steve Jobs and team regarding digital publication of newspapers and magazines), who may have inadvertently given away the name of Apple’s anticipated device.

“[Hopefully] we can get the newsroom more actively involved in the challenge of delivering our best journalism in the form of Times Reader, iPhone apps, WAP, or the impending Apple Slate.”

Nothing official has been confirmed, but the Apple Slate would be very fitting name for a large form touchscreen. The possibility that the device has seen production he is further bolstered by spare parts appearing online, in the shape of SIM card holders manufactured by electronic giant Foxconn, which is previously rumoured to have landed a contract with Apple for the tablet.

We’re still not likely to hear anything this year, but the chances of an announcement in the new year by getting better every day – especially now Apple will be going up against Microsoft with an even sexier touchscreen ‘booklet’ device.