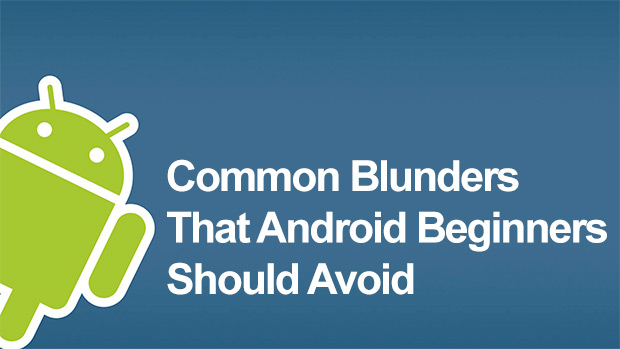 For the folks who have just stepped into the Android development, it is imperative for you to get familiarized with the most frequent developing mistakes that newbies often encounter.

Though the Android framework is not that complex, but its learning ropes might entangle you and trap you in the very beginning of your career. To reap the utmost benefits of Android app development, you need to work cautiously. You can avoid certain common mistakes and accomplish your project with ease.

Without any further ado, here is a list of few frequent mistakes that newbies generally make.

Isn’t it annoying and frustrating, when an application shutdowns or stop working while responding with an input? This could happen if the UI thread of the application is kept blocked for a longer period.

Every Mobile App Development Services provider uses various practices to develop an effective and user friendly mobile apps. Applications often initiate with a single thread that runs a message loop, and everything that is visible to the viewers, feedback that they receive, Activity onResume, drawing events, etc., all these are regulated via the message loops. If anything executing in this thread is consuming a lot of time, it will frustrate the users and force them to ultimately abandon that app.

You can use ThreadPoolExecutors and AsyncTasks to guard against blocking calls. It will toss these calls over worker threads. And for processing the results, you can implement callbacks and post messages in your message loop of the UI-thread, once the background tasks are accomplished.

Furthermore, you can enable “Strict mode” in your device to facilitate visual feedbacks to the users, while your app is running certain operations on the UI-thread.

Over commenting is a bad practice:

Indubitably, giving comments in between the chunks of code will make your program easy to comprehend in the future. But, adding extraneous or elongated comments is not a good practice, it can hamper your performance and make the code appear a bit clumsy and cluttered.

Avoid screwing up the programming format:

This has been observed quite often that newbie programmers screw up the formatting and make it rather hard to understand upon reading. It is that common that you can easily recognize a skilled programmer and a rookie one. Though, there are certain programming languages that demands formatting, but there are several others like JavaScript that do not.

It has been observed that rookie developers often commit this mistake, but, it is quite simple to remedy this issue.

Creating an interactive application will add to its market success, thus it’s advisable to integrate certain functions to lend a positive feedback while the user interacts with the application. For instance, when users push a button, it must be highlighted before responding to the action.

With Android, you can assign StateListDrawable to your custom screen element and for this, you can build a drawable XML file featuring a state selector.

Seeking guidance from the Android Developer website can help the beginners achieve their goal with ease. You will get a huge chunk of the documentation along with the SDK tools, which can also be downloaded online. This documentation not only epitomizes Javadoc API reference, but also includes tutorials, videos, etc., that can make Android app development a breeze.

Moreover, you can seek help from the Android Training for learning via resourceful tutorials that are well organized into several lessons and classes to assist the newbies and solve their doubts.

Efficient Java programming is required – Don’t be a lazy programmer:

Since, Java is a high end programming language featuring a virtual machine and demands high level skills; for developing using Java, you need to have your hands on the language prior to beginning the development process. It possesses standard programming guidelines. And, an inefficient and incorrect program can push your project into jeopardy; thus, it’s better to participate actively and work efficiently.

Maintain a regular backup of your work:

It is highly annoying when hours of hard work and efforts disappear in the end (or mid) due to certain stupid issues (either hardware or some other issue). Hence, it’s better to avoid such situations and take backup of your work at regular intervals while coding.

Integration with the OS:

There is a plethora of utile features that Android platform offers developers to easily and efficiently integrate their application with the other applications and systems. You can seek benefits of the intent handling, home screen widgets, and other useful functions, and ensure that your app is easily accessible over the mobile platforms and thus, can engage potential viewers with ease.

The above mentioned are some of the rookie mistakes that newbies often commit while developing their Android application. Get familiar with these common mistakes and avoid them to ensure an effective application at the very first attempt. However, it’s advisable to keep improving your skills and efforts and reap its incredible benefits while contributing to the Android community. Remember: “Practice makes a man perfect”.

Lucie Kruger Lucie Kruger is a Senior Content Editor and IT consultant for Mobiers Ltd. You can also contact her, if you are looking forward to hire mobile application developer for premium services. She is fond of sharing information rich content that is related to latest mobile app development.

Dulux Visualizer: An app that lets you paint your walls virtually →