Disney has pulled a proverbial rabbit out of its hat (or hole?) by surprising us with a timely Alice in Wonderland [App Store] puzzle-platformer to tie-in with the upcoming film release. 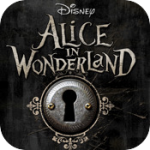 Our early impressions from playing through the first few levels are definitely positive, with a range of puzzles providing some fresh if challenging gameplay elements. Alice in Wonderland – An Adventure Beyond The Mirror, the game’s full title, pits you in the shoes of Alice who finds herself back in Wonderland on another inane adventure. By tapping on Alice you are able to change between four other characters including the White Rabbit, the Cheshire Cat, the Mad Hatter and the March Hare; each with their own abilities to help Alice navigate through the various puzzles you’ll encounter each level. The game’s write-up and feature list as provided by Disney is as follows:

Play as Alice and solve a series of puzzles with help from the Mad Hatter, White Rabbit and other memorable characters from the movie. Explore a world filled with whimsical settings, optical illusions, challenging puzzles, and formidable adversaries.

Master unique abilities with the help of Alice’s friends:

Freeze time with the White Rabbit

Make objects appear or disappear with the Cheshire Cat

Use the power of Telekinesis with the March Hare

Unlock Hidden Objects in Alice’s Journal with your GPS, Camera, Photo Library, and by playing the game!

100’s of puzzles and challenges to complete

The graphics in Alice in Wonderland are a rich, cell-shaded affair that bring out the child-like madness of Wonderland beautifully. In a way they remind us of the hit multi-platform indie game Braid (most definitely a welcome thing), which is fitting as some of the gameplay elements are very Braid-esque too, with stopping and starting time and objects featuring heavily from the get go. 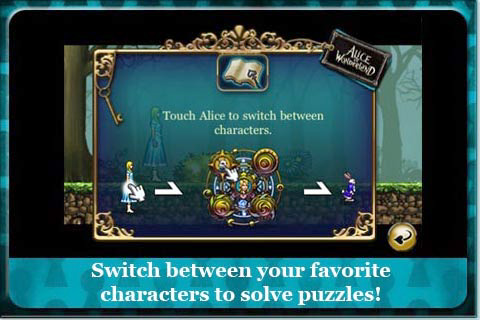