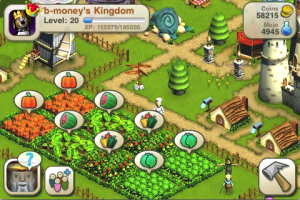 Much like Eliminate and TouchPets Dogs, ngmoco’s We Rule launched first in Canada this afternoon. Since We Rule heavily relies on the Plus+ network, this limited Canadian release is allowing ngmoco to make sure they’ve got all their servers working properly before the game is unleashed to the rest of the world. They haven’t said when they’re going to throw the switch to allow everyone else to download We Rule, but looking back at the limited Canadian releases of previous ngmoco games, it wouldn’t surprise me to see We Rule in the US App Store sometime next week.

We Rule is a kingdom building game, somewhat similar to the massively popular Facebook game Farmville. Here’s what we had to say about the game from our hands-on preview at Macworld San Francisco:

The game map shows you your kingdom as well as the kingdom of your Plus+ contacts. Scrolling across the map shows you the relative size of everyone’s kingdoms. The goal of the game is to build up your community as much as possible, but with the added twist that your own kingdom can be customized with a number of special cosmetic tweaks. These tweaks will make your kingdom truly unique and personalized.

The game consists of alternating between your daily activities of harvesting or otherwise managing your resources while building up new houses, farms, and businesses. Your kingdom will be bustling with activity from townspeople as it grows, though unlike God Finger, you don’t actually have individual control of the inhabitants. …Read More.

We’ll have a review of sorts when the game hits the US App Store, but in the meantime, if you’re lucky enough to have a Canadian iTunes account and are looking to add kingdoms to your network, my Plus+ username is simply “Eli”. (Although because of how the Plus+ search works, you’re probably better off searching for “Hodapp” or “Eli Hodapp”.)