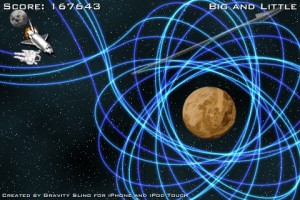 Riptide Games has released the first game that was the product of the 360 iDev Game Jam. The Game Jam was an all night coding session for developers to try to create a game in 10 hours. This particular game was created in conjunction with Jonathan Hartstein of Pyro Monkey Productions and Eric Lannan of Crucial Games.

Gravity Sling is an inertia based puzzle game, where you must try to get the astronaut back to the space shuttle safely. In order to do this you’ll need to take advantage of gravity from the nearby planets as you sling the astronaut through space.

Here’s a promotional video showing how the game is played:

Rather than releasing the game at the expected {content}.99 price point, Riptide games has taken advantage of Apple’s new policy allowing games to be distributed for free with the ability to purchase additional content. 15 levels are included in the free version, with 30 additional levels available in-app for {content}.99. This eliminates the need for a Lite version and could be a peek into how things may evolve in the App Store.

The Settlers and Castle Frenzy Coming This Month

The Settlers and Castle Frenzy Coming This Month