‘Mimeo and the Kleptopus King’

Shawn Inman has posted a video of his upcoming iPhone platformer that was created with partial assistance from a Makework Grant which funds artists to work on their “someday-I’d-love-to” projects.

Good pixel art strikes the perfect balance between appreciable craftsmanship and the gestalt. A single pixel out of place, one too few or too many, ruins the illusion. There’s an unmuddied, economy of expression, the thankless result of the limitations of cartridge-based consoles. 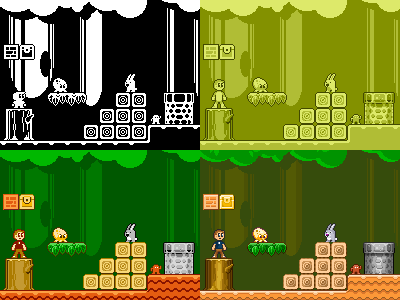 The premise of Mimeo is that of a Mario clone but where power-ups affect the entire game world, not just the player itself. Powerups will take you from a 2-bit world to a 4-bit, then 8-bit and ultimately 16-bit scene. Enemy behavior and level behavior changes between the modes so there is an element of puzzle-platforming involved.