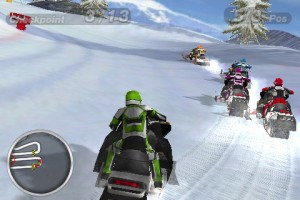 Featuring 6 tracks, bluetooth multiplayer, unlockable achievements, and strangely enough a file size that is small enough to download over 3G. It shares all the same tilt controls as the previous games, and seems to use a similar engine as the game plays very similar to the other two games in the Moto Racing series short of being on a snowmobile instead of a Jet Ski or an ATV.

The physics in the game can be a little weird at times, with your snowmobile just bouncing off things you run in to instead of crashing, but other than that it’s an enjoyable racing game with a price that can’t be beat. (Not to mention getting loads of air and pulling of tricks is just as fun on a snowmobile as it is on a ATV or Jet Ski.) While Snow Moto Racing doesn’t have a lite version, you can try out the free versions of either Aqua Moto or Dirt Moto to get a good idea of how these games perform and control.