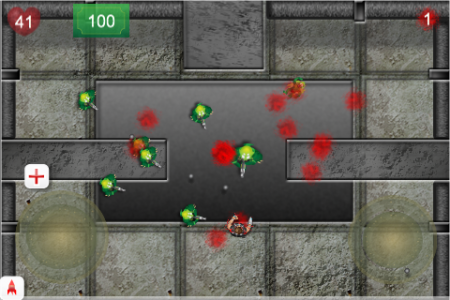 In the future convicts fight for their freedom in a frantic game show called ‘The Danger Room’. On this show the contestant must battle through 9 rooms for their freedom but each room is different and you face aliens, soldiers, zombies, robots, demons and more, before the final battle with ‘The Host’.

In each room there are weapon power ups such as shotguns, flame throwers, rocket launchers, and lazers. There are also lots of cash prizes to collect for you to spend if you can survive ‘The Danger Room’.

The Danger Room is a top down shooter from Debug Design. You play via two on screen joysticks to enable you to move and shoot in all directions. The initial build has 9 levels which can be fought through sequentially or be chosen via the level select screen. 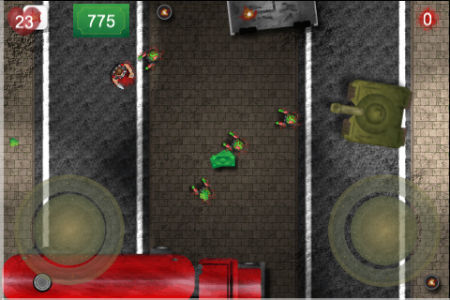 The game does feel like the companies first game but there is some hints of greatness here. The game has some similarities to Smash TV as you run around the room frantically shooting the enemies which change depending on the room. The levels look pretty good but the main sprites are slightly one sided in that they are directly from above and it would nice to see their legs move or something to help bring it off the screen.

Another good point is the fact that the levels change and on each the enemies get harder and harder (we kept dying on ‘The Island’) but there are not enough levels in this initial build and ith only 9 levels you will probably complete it in a few days. However the developers have said that future updates will include addition levels, weapons and a high score table which is a must as this would definitely increase the longevity of the game.

The sounds are actually quite funny and include a deep booming robot host, standard weapon sounds and various groans and death sounds. There is no music to any of the levels which may improve the frantic nature. 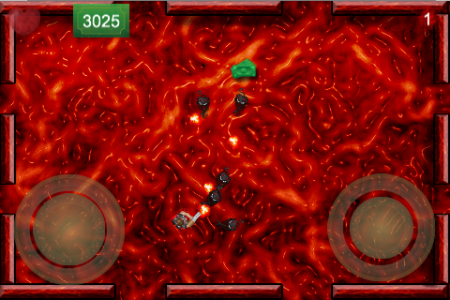 On the whole, its worth 59p /$0.99 as you will get a few days of retro frantic fun and if the developer does do the updates then it could be a lot better. The controls can be a little unresponsive at times and when your character disappears under your thumbs its a pain but its a fun little jaunt

Out this Friday so keep em peeled – we hope you have an interview with the company soon.