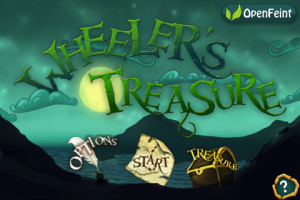 Two Lives Left have been posting regular updates in a thread on our forums about their upcoming game, Wheeler’s Treasure. I recently got my hands on a copy of the game, and so far I’m extremely impressed. Not only did they seemingly create an entire game inspired by the Orlando Bloom water wheel fight scene in Pirates of the Caribbean: Dead Man’s Chest, but they’ve really managed to nail the difficulty curve.

One of the things we’ve discussed at length during our podcasts is how much we enjoy games that foster the feeling of if you could only have managed to not make that last mistake you could have gone even farther, almost forcing you to play again to see if you could beat your previous attempt. Games like Flight Control and its associated spinoffs, Doodle Jump, and the recently discovered Boost 3D all provide this experience, and so far Wheeler’s Treasure is giving me a similar vibe. 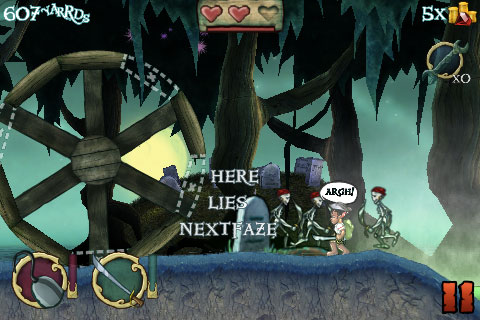 The goal of the game is to see how many yarrds (get it?) you can accompany a wheel through a sidescrolling environment filled with all kinds of obstacles. Your character is moved using simple swiping gestures, and buttons in the bottom corner of the screen control the use of your items– Another clever feature of Wheeler’s Treasure.

The game includes achievements, such as picking up a certain number of jewels or stomping on a certain number of bats in one run. Each achievement unlocks a map that gives you a hint for where you can find items that your character can equip. During the tutorial you’re awarded boots that allow you to double jump, and a hook that you can use to grab on to the wheel for a brief period of time. Meeting the goal of the jewels achievement tips you off to where you can find the loot magnet, making picking up coins easier. 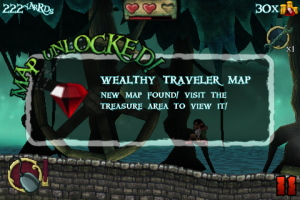 The entire game is wrapped in a whimsical hand drawn art style with music that matches perfectly with the look and feel of the game. Wheeler’s Treasure features complete OpenFeint integration, so when your game is finally over either from your death or your wheel’s destruction you can submit your score to the online leaderboards before starting again. These scores appear in-game as tombstones, providing an excellent indication of how you’re stacking up next to your friends’ performance.

The game world is procedurally generated, so no two games will ever be the same, and obviously the farther you go the harder the game becomes. As you progress in game, you also will unlock additional 3D scenes to reveal the story behind Wheeler’s Treasure.

Two Lives Left recently released this gameplay trailer, along with a few other gameplay videos and control demonstrations in their thread for the game:

Wheeler’s Treasure has already been submitted to Apple for approval and is expected to appear on the App Store sometime soon.