Reiner Knizia holds a PhD in mathematics, and is credit with publishing over 500 different puzzle games, many earning various awards worldwide. Developing his first game at the age of 6, Knizia left a job as a boardmember of an international bank in 1997 to pursue game designing full time. Since then, he has been admitted to the Gaming Hall of Fame and redeveloped several of his old games along with creating new games for the PC, home consoles, and iPhone.

His latest iPhone game, Topas [.99], tasks players with placing colored domino-like tiles on a game board in three included game modes. To place tiles, you drag them around with your finger, and tiles can be rotated by tapping on screen with another finger. Tiles are placed on the board following a few simple rules: They must be placed with the whole tile fitting on the game board, every tile must be placed next to another, and the aligned gems on the tiles cannot total more than 8. Points are awarded for the number of gems lined up with each tile placed, and Topas has Agon online leaderboards for each of the game modes.

In arcade mode, you have 36 tiles to place on the game board. Tiles are cleared by lining matching colored rows of gems up and down or across that add up to 7. If you place all 36 tiles, the board is cleared and you can keep going in attempt to get the highest score possible. In weakest link mode, you play 4 quick games placing 8 tiles, the second lowest score of the four games is your end score. Finally, in color play mode, instead of the board clearing when you place all 36 tiles, you only need to score 10 points in a single color, indicated by gauges at the top of the screen. 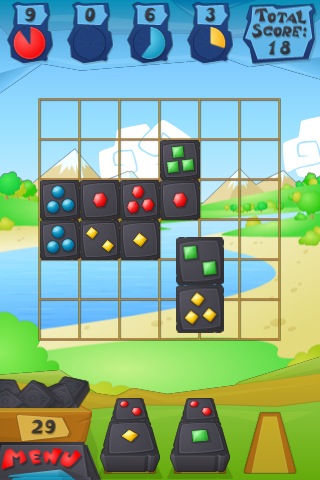 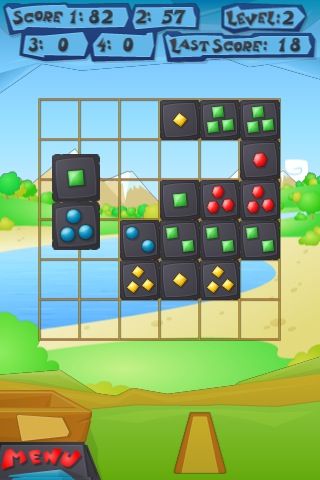 Like most of Reiner Knizia’s games, scoring well in Topas requires quite a bit of strategy, and wile the basics of the game are quite simple, it took me a while to wrap my head around ideal tile placement for maximum point gain. Knizia has quite a few iPhone games available on the App Store now, and they are all quite good in their own ways.

Ingenious, .99 – Take turns tiles on a game board, scoring points by creating lines of tiles with similar colors. Play against AI opponents of three difficulty levels and place tiles to block opponents in and make as many matches as possible to increase your score. There’s also a solitaire mode if you’d rather just place tiles to see how much you can score.

Money, .99 – Starting with six random bills from different countries, players try to exchange their money in to 2-3 currencies before the end of the game. There’s a YouTube video explaining the entire game and also an interesting article on boardgamenews.com about adapting the card game to the iPhone.

Monumental, .99 – A Mayan themed matching game where players slide around tiles to form groups of 3 colors, symbols, or both colors and symbols for maximum points. Broken stones and dynamite mix things up, and as you progress in the game more colors and symbols are introduced to increase the difficulty curve.

Roto, .99 – Players must analyze a group of wheels with colored segments and match those segments by rotating those wheels as few times as possible for maximum points. Roto comes with arcade, puzzle, and action modes which all provide a different spin on gameplay.

Robot Master, 99¢ – Players take turns placing numbered cards down on the game board, scores are totaled by adding the numbers of all the cards, with huge bonuses awarded by lining up pairs and three of a kind on a row.

Knights of Charlemagne, .99 – Deploy knights and conquer estates by overwhelming the enemy forces. The strategy and gameplay can get a little complicated, but thankfully the game comes with a great tutorial.

Poison, .99 – A card game of brewing potions, players take turns placing numbered potion cards in to three different cauldrons. If a player over-fills a cauldron, they have to take all the cards (and any poison cards) that were inside the cauldron.

The above games are developed by several different developers, so the visual style quality of each of the games varies widely. All of them are faithful reproductions of Reiner Knizia games, require a great deal of strategy, and can offer an awful lot of replay value if you appreciate brain-bending puzzle games.