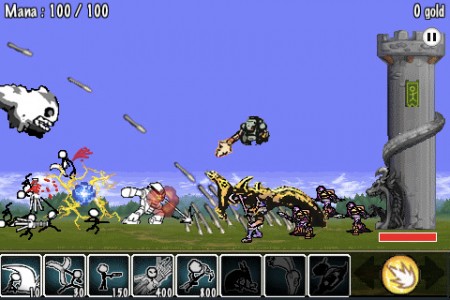 There are few things finer than a spot of stupid heaped atop cartoon violence.

That said, for all the gloriously gratuitous shuriken-in-the-face moments that pepper Cartoon Wars, the game is not as brainless as its puerile presentation would have you believe.

The 2D play area features a tower at both ends, black and white units spawning from the left structure via a selection panel along the bottom of the screen. Spawned units move automatically toward their colourful foes on the right of the screen.

The goal is to spawn enough units to successfully overwhelm the colour tribe and destroy their tower. This necessitates the prudent spawning of units, which are purchased using the game’s currency, Mana.

It essentially boils down to resource management.

Fail to get your troops mobilised early on and you risk fighting tooth and nail stay in the game. If you blow all of your resources too soon however, fending off that crucial mid-point of a battle may get the best of your defences.

Along with ground units, you have a turret-mounted long-range crossbow, which is controlled by a somewhat unruly slider mechanism, but still useful for providing extra punch when your Mana is running low.

Winning battles earns gold, which you can spend on upgrading units or purchasing new ones including gunners, ninjas, and wizards.

The gameplay is fun, with the linear progression capably stimulating those tingling reward receptors in your brain, and the chaotic battles aren’t short on spectacle or excitement.

There’s a conspicuous lack of a two player mode, which would have suited the gameplay wonderfully though. This would have helped the single player mode, which, lumbered with the task of carrying the whole game, isn’t quite deep enough to keep you engaged for lengthy sessions.

There some tactics to be used and enjoyed, but even with the addition of new units, the gameplay doesn’t evolve throughout the course of the game and monotony creeps in from time to time.

At the outset though, this is a refreshing take on Tower Defense, and it’s deliciously violent throughout.

Cartoon Wars isn’t outstanding, but for the price, it’s worth a place on any TD fans’ home screen. 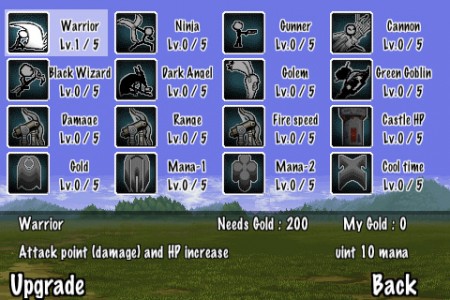