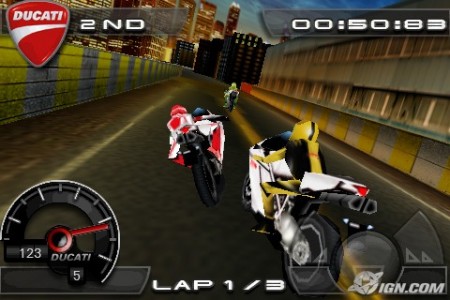 The benefits of riding a motorbike seem to be massively outweighed by the cons. It’s expensive, dangerous, noisy, impractical, and you have to wear a gigantic helmet when riding.

None of that diminishes the breakneck excitement, which in turn should make for an exhilarating game.

Unfortunately, Ducati Moto captures none of this thrill, instead exhibiting a number of cons including clunky controls, lagging sense of speed, and poor graphics.

Ducati Moto does offer some great ideas, though they’re quickly run over. Recruiting the well-known powerbike company is the first thing the developer has done right. The game includes eight Ducati models, though other than a marginal increase in speed and a bit of colour there’s really no difference between them.

Rather than provide a slate of courses, the game uses one big, complex, winding track. It’s an interesting approach that has you racing through different parts of it depending on the challenge posed. Handled properly, this city-wide ant farm of roads is a great way to cruise the streets looking for action.

Nevertheless, these small triumphs don’t come close to salvaging what has to be one of the worst set of driving mechanics ever seen on the platform.

You steer by tilting your handset, but the game might as well employ the volume control buttons. Tilting has your biker leaning hard, essentially reducing the controls to a digital system.

Turns involve steering sporadically (at full wheel lock) to the left or right in an attempt to coax the bike into pointing roughly in the right direction. If you come out of the corner and you’re not heading in a straight line down the road, there’s no hope of straightening out.

Fortunately this atrocious steering method is made a little easier by the fact that these bikes are no faster than an electric mobility vehicle being driven by a blind grandmother in a crocheted bobble hat. The experience wouldn’t be any more agonising if the bike’s seat was replaced with a rusty spike.

It’s a shame that Ducati Moto can’t blame its dreadful performance on graphical weight. While the backgrounds are decent enough and the presentation perfectly acceptable, the bikes and riders would look questionable on a Game Boy.

The 3D models are rough and jagged, while the animation looks as though a puppeteer is pulling strings from about your iPhone. Presumably this is a license left over from the DS version of Ducati Moto, since it’s hard to believe the bike manufacturer would be too keen on showcasing its motors as boxy, misshapen figures.

Deep, deep within Ducati Moto there is a germ of a good motorbike racing game (mainly in the gambling stakes and the excellent track layout), but it’ll take an entirely new racing system to bring it to the surface.