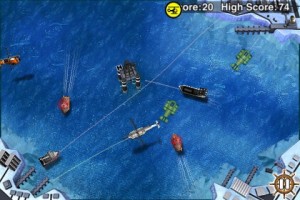 So, is it possible to fit another worthy line-drawing game into an already crowded market? Backflip Studios thinks so with their new game Harbor Havoc 3D [.99].

Like Flight Control, the objective of the game is to route your ships to their proper docks. Simply draw a line from the ship to the dock and you’re on your way. Harbor Havoc 3D’s claim to fame, however, is the incorporation of multiple layers of vessels that you must properly navigate. Depending on the map, this can include submarines, boats and helicopters or even submarines and ground rovers in the underwater map. Each type of ship can only collide with like ships, so keeping this in mind is critical for success.

The game comes with 4 maps: Far East, Atlantis, Arctic, and Lighthouse. Each offers a variant in gameplay. Far East is your straightforward Flight Control setup where you are docking different ships to their ports. Ships, however, don’t have to be undocked as in Harbor Master. The game also adds an anchoring mechanism by tapping on a ship that will keep them in place. The Far East map is going to feel boring to anyone who has put in much time in any of the existing line-drawing games, but Atlantis and especially Arctic are where things get interesting.

The developer’s gameplay video shows how crazy things can get and even shows the locked Lighthouse level which gives you a partially obscured view of the play area.

For advanced players who have gotten bored of Flight Control and are looking for more of a challenge, Harbor Havoc 3D manages to provide added layers of challenge without necessarily being different just for the sake of being different.