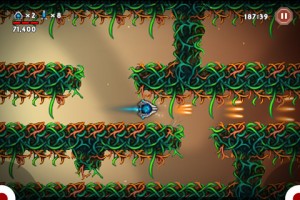 The .99 game offers a beautifully stylized side scroller that places you as the pilot of a nano machine whose mission is fight off viruses and save the humans from disease. Designed for the iPhone, the game has some nice touches with a good variety of level design and power-ups that seem to keep the game interesting. Three levels of difficulty are provided over 9 different stages, and the game also provides online leaderboards.

The game is controlled primarily through the use of the iPhone’s accelerometer allowing you to move the ship with tilt controls alone. This can be calibrated in the options so you can choose the neutral position. Your primary weapon is fired automatically and can be upgraded multiple times. Beyond this, the game also offers a nice touch targeting system for missiles akin to Space Deadbeef — simply touching on the enemies will lock on your missiles.

Here’s the game in action:

The developers have also released a fully featured Lite version that provides the first two stages of the game, complete with all 3 difficulty levels. There really is a lot to like about this game, and the production values are outstanding. My only real issue with the game may simply be a personal one. I’ve never been a fan of the use of the accelerometer for ship movement in 2D iPhone shooters, and I much prefer touch (which is not an option). If you have no such hang ups, this game is definitely recommended, but even if you do, the Lite version provides you with a great sampling of the game.