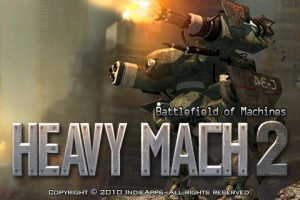 When we took a look at the first Heavy Mach, we thought it was a fun side-scrolling shooter with room for improvement. Nearly a year later, developer IndieAn has released Heavy Mach 2 [App Store], a greatly enhanced sequel that abandons side-scrolling for a top down perspective among other changes and enhancements.

Gameplay in Heavy Mach 2 consists of taking various missions that seem to either have you killing things or collecting things, going out in to the battlefield to fight with your tank and returning with your spoils. As you earn credits and experience by defeating other tanks and completing missions, you can eventually buy tons of weaponry and different upgrades to your tank as you level up. 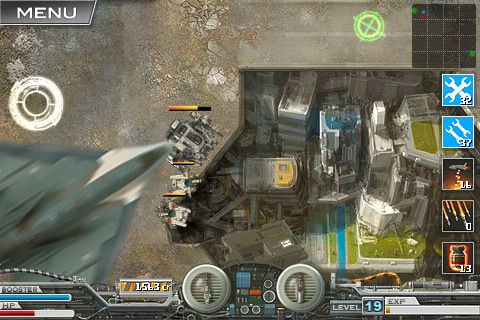 My favorite part of this game is how well the controls work. While the developers could have easily just used a typical virtual dual-stick control scheme, instead everything is done using different taps and drawing gestures on screen. To move your tank you can either tap on the battlefield, or you can draw a line with your finger for the tank to follow. Your tank will try to follow the exact course you plotted, so it will often get stuck if you try to make it cut corners or drive places it can’t. This is easily solved by just tapping or drawing on the screen to move somewhere else.

Attacking enemies is as simple as tapping on them, and letting your weapons do the rest. Tapping on screen twice causes your tank to dash in that direction. There are buttons framing the screen to use special abilities (such as calling in air strikes) and changing weapons once you get more than the starting load out. The interface as well as the different tanks themselves and the terrain are extremely detailed, and the animations are great– Much like the original. 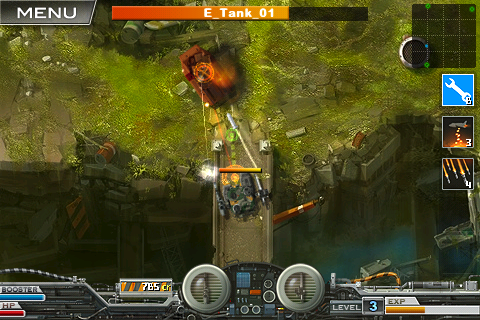 The only thing that really seems to be missing in Heavy Mach 2 is any kind of plot to follow. The highly detailed scenery does a great job of setting the futuristic war-torn the mood of the game, and I just can’t help but wonder why you’re just randomly taking missions to destroy things. Maybe that’s just me.

Heavy Mach 2 combines the RPG elements of an experience and leveling system along with seemingly endless equipment upgrade and customization options. The controls work well, and I’ve had a great time rampaging through the countryside blowing up every tank I come across. While the original Heavy Mach was a great sidescroller, the sequel has translated well to the overhead view along with improving nearly everything from the first game. If you’re a fan of tank combat, you really should give Heavy Mach 2 a shot.