Japanese publication Famitsu reveals that Namco will be bringing Taiko no Tatsujin to the iPhone and iPod Touch. The game has been called Taiko: Drum Master in the U.S. and is a rhythm/drumming game where players match up beats to on screen icons:

According to the article, the iPhone version will have online/twitter support as well as multiple levels of difficulty. Here is a screenshot of the Japanese version: 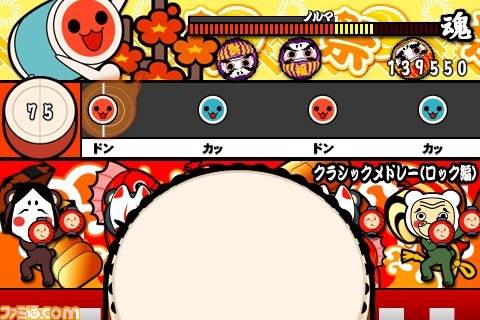 The series has previously been ported to the Nintendo DS, PSP and Wii platforms, amongst others. The arcade version came with a physical drum and sticks to play with, while the DS and Wii versions had natural adaptations to the platform. The iPhone version will, of course, use fingers for the drumming. Here’s a video of the game in action from the PS2 version:

The game is expected in March of this year.