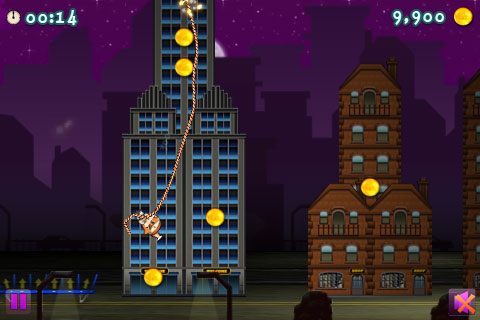 Everybody wants to be a superhero, but let’s face it, most of us don’t look the part. But that’s okay, 10tons Ltd. has totally factored that into their iPhone app, Rope Raiders, in which you’re an overweight guy in a horribly orange outfit, swinging through the city with a grappling hook. There are three different game-types, each with three different levels of difficulty: Free Swingin’, Coin Rush, and Speed Frenzy; easy, medium, and hard, respectively.

Tap on a building to throw out some rope and hook onto the building, then tap anywhere to release your hold on the rope and swing free (rinse and repeat); the longer the line that’s thrown out, the more speed and momentum you’ll have. That’s about all you have to know for controls. In Free Swingin’, there is no time limit, so the goal is the get as far as you can; collecting coins are a bonus. Coin Rush and Speed Frenzy, on the other hand, are both timed. Easy is 30 seconds of game time, medium gives you 45 seconds, and hard is a whole minute of gaming. Coin Rush has you collecting coins, stacks of coins, and extra time, while Speed Frenzy is just about getting as far as possible in the allotted time span. There are objects like trampolines and air balloons that can help–just avoid hitting the ground, and you’ll be fine. 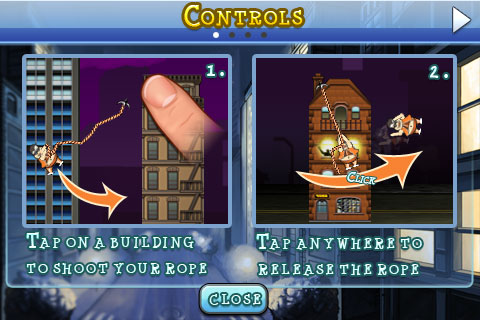 There seems to be no real objective to Rope Raiders: there are no villains or heroes to defeat, no end game or master plan to carry out…just gathering as many points as you can to get on the global leaderboards, if that’s something you fancy. The graphics and animations are pretty slick, especially in the tutorials (the nighttime city backgrounds lend a lot to the atmosphere), and the controls are excellent. Of course, timing and accuracy is everything in this type of game, so you might need a little practice before getting the hang of it. You can listen to the great soundtrack or substitute your own music, and the rope sound effects are fun. Rope Raiders is very polished, easy to get into, and a great way to waste some time. This is as close as you’ll ever get to being Spiderman, so get into the swing of things and grab this app. 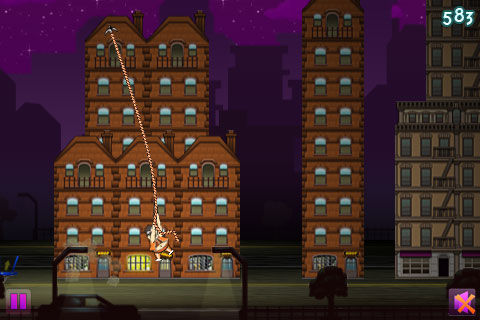