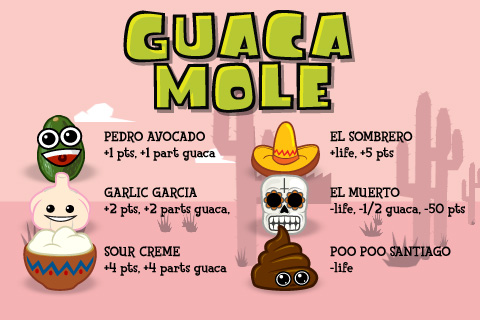 To make guacamole for a hungry Rodriguez, you need Pedro Avacado, Garlic Garcia, and Sour Creme…that is, according to Bambalam’s Guacamole iPhone app. A modified version of Whack-A-Mole, those three items need to be hit whenever they pop up on the screen; just tap and watch the squishy fun. All the ingredients you whack will be added to your guacamole, which is done when the level bar on the right is filled; the other bar on the left is your life bar, which will lower every time you hit the El Muerto mask or Poo Poo Santiago (which you should avoid hitting just on principle alone because…ewww). Tap the sombrero to add to your life bar, and don’t forget about the Sour Creme that slides along the top. After the guacamole is made, dip the nachos into it and feed it to Rodriguez for extra points (trying to throw it into his moving mouth is a fun challenge). 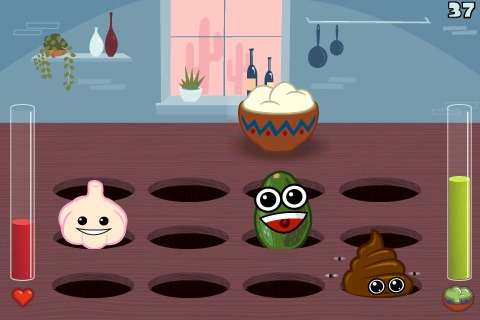 Guacamole (what a clever name) is a fresh, fun, and fast-paced game with cute cartoon graphics (the pile of poop has eyes!) and good gameplay; the app hardly ever misses registering a touch. However, there is no pause button, you can’t skip levels (nor does the game automatically save at the level you were at), and there really isn’t much more to the game than making guacamole, so it’s great for short-term spurts of gaming. But the background music is excellent, as are the sound effects (again, avoid the pile of poop), and the game itself is well-designed, so try this game app out for a few moments of chuckles and furious poking.