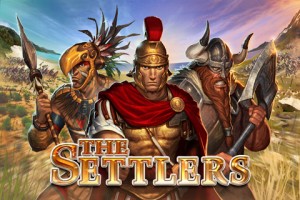 The Settlers is a real time strategy (RTS) gaming series that has evolved quite a bit over the past two decades. Gameloft’s The Settlers as a standalone game brings a slightly different take on RTS to the iPhone/iPod Touch platform that for the most part delivers, but also bringing a few frustrations along the way including the omission of a freeplay mode. Ultimately, The Settlers is a solid experience and good introduction for newcomers to the series.

As with any typical RTS game, the objective is to build a community, establishing a means of income, develop a powerful military, and expand territories. The Settlers, however, is less about tactical micromanagement and more about strategic planning. In many ways, The Settlers is a game focused on urban planning where the placement and construction of buildings play heavily in your success. Unlike many of today’s RTS games, direct control of individual or groups of units is limited. You literally establish a virtual society where your vision will set it down the path to success or failure. This premise alone makes The Settlers worth considering especially for newcomers to the series. 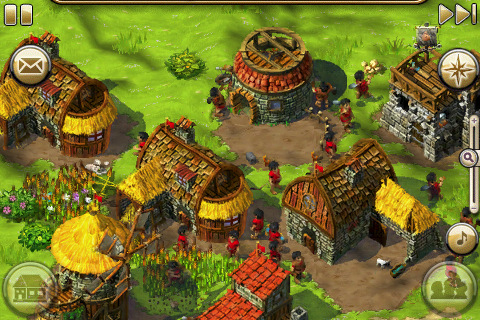 As expected, Gameloft has done an impressive job with visuals in The Settlers. From the buildings to the animations and actions of individuals, The Settlers provides an enjoyable viewing experience. Even the random fluttering butterflies, foraging forest animals or the crashing waves seem to bring just the right amount of personality. To further the immersive experience, the sound effects are particularly well done from the birds chirping to battle cries. One minor issue is the soundtrack, which is short and noticeably irritating when it loops, although you can play your own music if you choose. 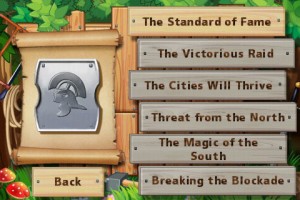 The Settlers consists of 4 tribes— Roman, Viking, Mayan and Dark Tribe —each with a series of mission-based campaigns. The most extensive set is the 12-mission campaign against Dark Tribe where you play as each of the tribes in campaigns to conquer them. Unfortunately, a free play mode isn’t included, though the length of included missions should take significant time to complete, and unlocked missions can be replayed at any time. Auto save is also included along with 5 save slots which is a necessity for a game of this length and depth.

The game boasts an intimidating 35-screen help section which is your first indication of the great depth in The Settlers. These screens are categorized into 8 sections: Buildings, Goods Flow, New Colony, Settlers, Warriors, War Machines, Alcohol, and Magic. The game’s tutorial does a good job walking you through the basics. Each mission is introduced with a cut screen providing a story background followed by objectives which are well thought out.

With all that it’s involved in The Settlers, the user interface is adequately laid out even though it may feel cluttered for some. Like most RTS games, certain things need to happen in a certain way before being able to do something else. For example, to tap into resources such as gold, you’ll need to recruit geologists, send them out to survey a site, build a gold mine, a gold smelter to process, and then a weaponsmith to make tools and weapons. In many cases, you’ll need to have tools made such as shovels and pickaxes to before The Settlers can proceed with their work. 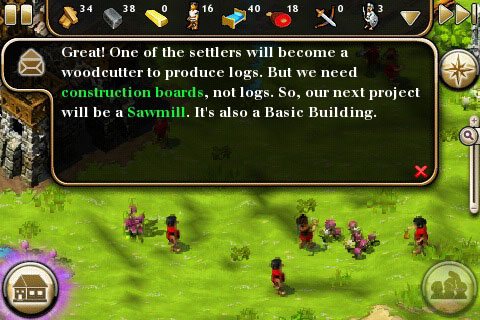 Building and placing structures is rather simple. Once a structure is selected from the Building menu, a series of dots will appear on the screen. These are the locations on which the new structure can be located. It’s here that you can watch the little tribesmen work, and the animation really makes it interesting to watch. Of course, you can also fast forward through the process if you want to the speed up the game. Once a structure is placed, statistics can be viewed by tapping on it. For example, a gold smelting building will show how much is produced, while a tower will indicate the number of troops.

The Settlers has a different dynamic which you will either love or hate when it comes to the moving settlers since many are not under the player’s control. When a unit is controllable by a player, they can be selected either by tapping, drawing a square using a pinch motion around a group of settlers, or accessing the Find Settler button. Once selected, tapping on a specific location will create a flag which serves as the meeting point, and the selected settlers will move accordingly. One of the small issues is that settlers you control will tend to revert back to what they were doing no matter where you want them to go, so control is a relative term. Some characters such as the carrier, digger and builder automatically perform their tasks and cannot be controlled. For those new to the game, the limited amount of control can be frustrating especially since these settlers can move rather slowly.

Gameloft has provided this tutorial video to show how to play the game:

Battles can be fun as you recruit and train troops and then watch the ensuing fight. But keep in mind, beyond directing the direction of troop movements, there are no tactical decisions to be made during a battle. Besides magic, there are several war machines available based on the tribe. These include Roman catapults, Mayan firespitters, and Viking Warships, which create visually eye catching damage during battles.

After initially not being too high on the gameplay, I found myself enjoying the game more as I progressed. Personally, I prefer the ability to control the movements of the people in my virtual community, and can see this being an issue for those who fall in the same camp. Long time Settlers fans however point out that such micromanagement was never the focus of the early versions of the game.

Because the game is focused on strategic planning and less so on micromanagement, the enjoyment level may vary based on your personal preferences as you’ll spend a fair share of time watching rather doing. As a result, I found the game can be a mix of fun and frustration. Regardless of your previous experience, however, the game does offer a solid and deep experience with beautiful graphics. The missions and the maps are elaborate enough to offer hours of play, bringing enough to separate itself from other games in the genre.

The Colbert Report’s The Word

The Colbert Report’s The Word