The age of zombie games came and has not really gone. With The Walking Dead, Day-Z, and people still playing Left 4 Dead religiously, it might be a while before these shamblers disappear. Not every zombie game is equal though, and Zombieville USA is definitely a great mobile game for the money.

Zombieville USA is simple; you choose a character, each of which has strengths and weaknesses, and you side scroll through towns, bashing zombies with melee attacks or utilizing guns to mow them down. The more zombies you kill, the more money you get. You can also loot homes for ammo and to hide from the onslaught.

Some levels you might luck out and find a vehicle has spawned. It’s neat when this happens; you can tap it to jump right in and it will not only take you directly to the end of the level, but kill tons of zombies along the way. 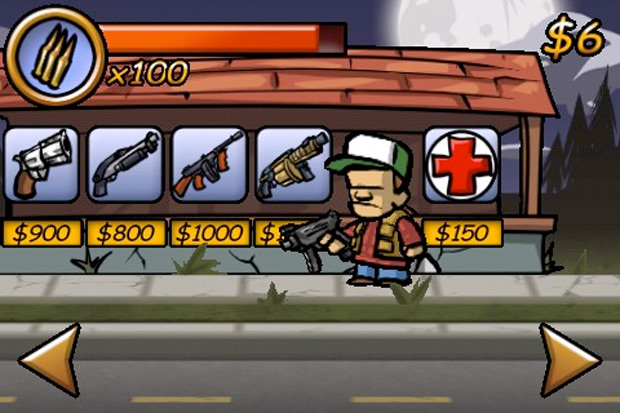 In between levels, you can buy weapons or health, often a tough choice when you don’t have much cash on you. As you get through later levels, a lot of the weapons become obsolete. Getting into level 40+, you might as well forget everything else and stick with just the rocket launcher and laser gun, which really takes a lot of the fun away. It would be much better if the other weapons could be upgraded to be strong enough to take on the stronger and more numerous zombies (and boy, is there a ton in later levels). It makes it feel like the other options are just moot at that point and it becomes less fun.

As far as it goes, it doesn’t seem like there is an endgame, though it’s possible it doesn’t go past 99 levels, which will still keep you busy for a very long time. It’s truly a game of survival; you will keep going and going against wave after wave until your finger can’t tap anymore. Despite it’s very hard AI later in the game, it is still an enjoyable mobile game you’ll find yourself going back to, from time to time.