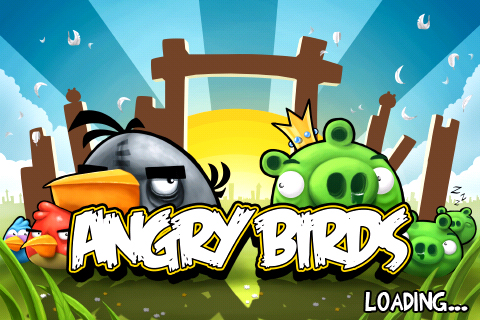 Angry birds originally came out for the iPhone and has recently been brought to the iPad as an HD. The app is another physics-based game which focuses on knocking down different structures and crushing every pig found inside. Stars are earned for each level based on how many launches it takes to crush every one.

The gameplay is very simple. Users start a launch from the slingshot and depending on what bird is being launched, they might have to tap again to activate the ability. The game features some wacky birds each with their own unique abilities.

After passing various sections, different birds will be unlocked and the user’s ability to use each bird’s various skills will determine if they pass the level or not. The iPad is the perfect setting for a game like this but there really isn’t anything that has changed between the versions. This means if you’ve already purchased the cheap iPhone version, you’ll have to repurchase the new app for 5x the price. For some of you, that may be worth it, but for most of us this is extra money we don’t want to have to spend.

Overall, the game is still amazingly fun, but I personally couldn’t justify purchasing the same exact experience over again for extra money. Check it out.