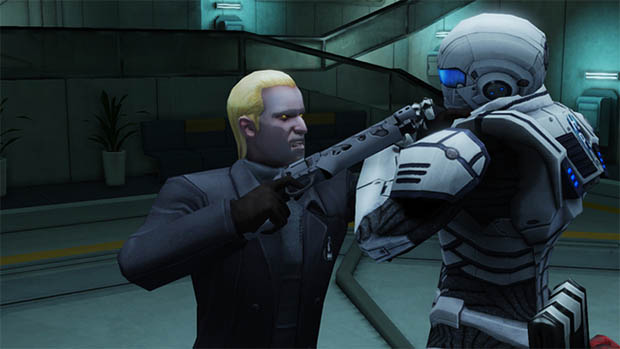 Having taken delivery of my shiny new iPhone 6 I thought it was a great opportunity to stock up on some new games. A Few Days Left (AFDL) was my first purchase as it looked to push the boundaries of my new hardware.

In AFDL you play Officer Robert Campbell, aka Vengeance, an armour suited, super soldier trying to keep the peace in a world collapsing into the zombie apocalypse.

The game is reminiscent of Halo: Spartan Assault with a sprinklings of Resident Evil. It balances frantic twin stick zombie shooting action in a psuedo-top down viewpoint with an array of different puzzle elements. One minute you will be cutting your way through an onslaught of charging zombies with your assault rifle and the next you are playing a memory game with a psychotic Prison Director. 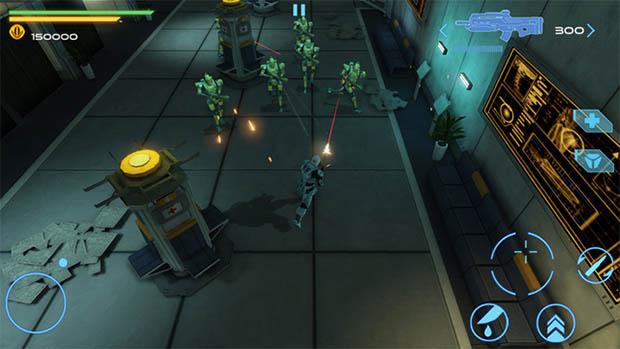 The game has a decent budget with scripted ‘in-engine’ cutscenes and passable voice work but it would benefit from some final polish. This action packed shooter works hard to cram in as many options as possible. A swipe control is used to change weapons and sporadic shop keepers offer a slew of different weapon types and upgrades. All of which are a little too expensive to get on a ‘free’ play through. A jump button creates some verticality and allows the protagonist to navigate over small obstructions and access higher levels. The melee button comes in very handy when swamped by the undead and become invaluable when reloading. Finally, the gadgets functionality means you can drop mines, release drones and throw smoke bombs. This mass of options does make you feel like you are getting a lot of game for your money, and it is pretty cool to have a drone fly around the screen taking out your enemies. However, all of these buttons do make the GUI a touch overcrowded and if you have fat fingers you might press shoot, melee and jump at the same time (on my iPhone 6, not on iPad).

The story moves along at a fast pace with twists and turns throughout introducing additional characters such as the sword wielding ninja and a maniacal scientist. 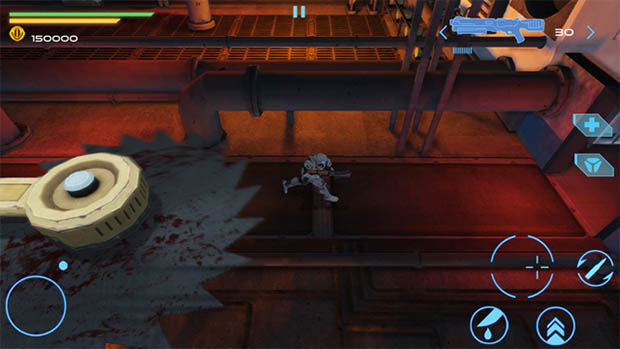 Overall, the game deserves its ‘app store’ featured status as it looks great and has responsive controls. The game feels cinematic, with an engaging narrative despite some dodgy voice acting. The gadgets are a exciting addition and there is plenty of game to keep to busy. The additional weapons and upgrades are a bit on the pricey side and many will not want to spend more than a couple of dollars on upgrades. However, the game is fun and congratulations has to go out to the team at Fedeen Games For translating this third-person twin stick shooter to mobile devices. It’s well worth a play. 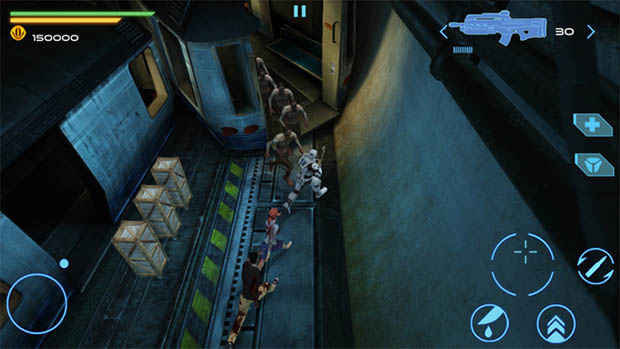