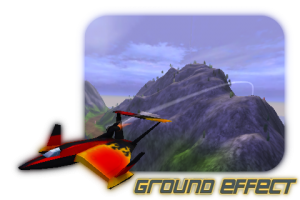 Ground Effect, developed by Glenn Corpes, has been in development for a few months now. Posting as “GlennX” on our forums, Corpes has posted constant updates since May of this year, along with utilizing the Touch Arcade community as a beta testing pool. It’s always great to see projects like this with so much involvement from our forums, and having played a preview build, it seems that polling the community has paid off.

Ground Efect is an arcade style Ekranoplan racing game that takes place around a series of 14 different sets of islands. The relative simplicity of the geometry of these islands allows for an extremely impressive draw distance in the game along with silky smooth framerates on my iPhone 3GS. The game is controlled utilizing either tilt or touch controls, and they work just as well as all the other racing games on the platform. Acceleration is handled automatically, but there are two on screen buttons for boosting and braking. Doing well in the game requires intelligent management of boost, which slowly recharges when you’re not using it.

Ground Effect features atmospheric music from the Danish band Diefenbach, which fits perfectly with the mood of the game, 10 different race craft to choose from, along with both daytime and night races. According to the developer, this fun arcade racer is only a few more days worth of tweaks and unless a beta tester finds a major bug, Ground Effect will be submitted to Apple very soon.