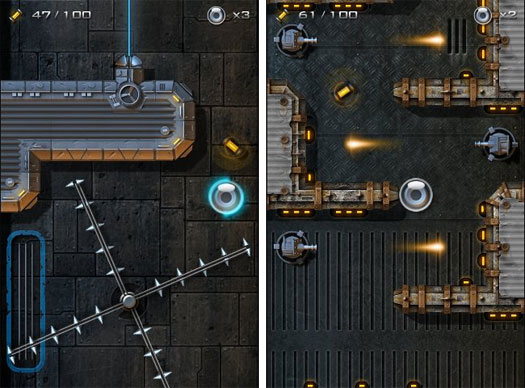 Dark Nebula is described as a “skill-based action game” which we previewed back in August. The game is brought to us in part by Anders Hejdenberg, the lead designer of Battlefield 2: Modern Combat.

Dark Nebula is a tilt-controlled ball roller, but one that adopts an action/arcade vibe rather than the more tedious precision work found in many others. In fact, it feels so different, I’d hesitate to put it in the same genre. The game proceeds across 10 levels of action-packed gaming. Each level is very well designed with a variety of obstacles introduced along the way. Your tasks include the avoiding of spikes, triggering switches, avoiding laser fire, and more. And despite no calibration options, the game’s controls seemed perfect.

Each of the 10 levels are primarily vertical scrolling scenes with distinct start and end points. Your ball has a single shield that can be replenished along the way. Get hit with your shield down or fall off the level and you have to restart at the beginning of the level poriton you are died on. If you lose all your lives, you can restart at the beginning of any level you’ve unlocked. There are 10 levels in all.

In fact, it seems the developers have gone to special trouble to avoid user frustration in the game. For example, if you get killed by a laser shot or spinning spikes, these elements actually slow down so it’s easier to get through on your next life. The result is a game that you will enjoy immensely to the end, though one that will end relatively quickly.

Dark Nebula is billed at offering an hour’s play time to make it through the entire game. If you are particularly coordinated, you will be able to make it through in a significantly shorter amount of time, though going back to get gold stars on each level do offer a legitimate amount of replay value.

Overall, Dark Nebula offers a very fun, action-arcade experience that we loved every second of. The game’s rather short length, however, is a legitimate point of concern, but at only {content}.99 and high quality of the overall experience, we still recommend it.