Racing: whether it’s the comical tractor lawnmower variety, Earth-churning horsepower of a rally car, or neck-breaking pace of an F1 championship, a spectacle is almost certainly guaranteed.

Man has seen fit to race in just about everything for the challenge, the thrill, and for competition.

Sadly, most of us don’t have the backing of Honda’s Formula 1 division or a rally deal with a major car manufacturer, so most of us will never quite know what it is like to accelerate in an obscenely low number of seconds to 60 miles per hour. 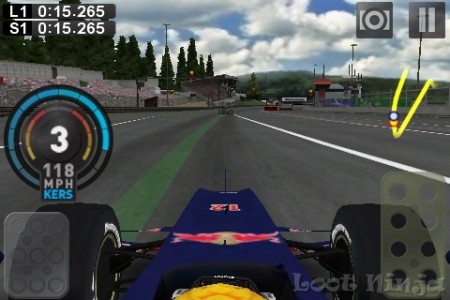 That’s precisely what F1 2009 offers, though time is more central to the experience than speed. Time trials supplant actual competition, leaving what ought to be a lesson in high velocity racing nothing more than a rush against the clock.

There’s some satisfaction to be had from setting new lap times, but that’s all you will be doing – no other modes are offered.

Without other racers on the grid it’s hard to check off thrill and competition. It feels empty, almost like a demo, as if Codemasters forget to add in a large chunk of the game. It’s all the more a shame when the driving mechanics are as finely-tuned as they are here.

A score of authentically rendered tracks are included, not to mention some fairly respectable graphics and two different lap time modes, but these don’t stop F1 2009 from feeling like a Lite version of itself.

There’s even a bit of slowdown on iPhone 3G and older iPod touch handsets, which doesn’t help its cause.