Have you ever wanted to prank your friends at the bus stop, but couldn’t find any way to do it? Well, your problem is now solved. Coming straight out of the depths of the deepest, darkest pits of the internet is the Scary Maze Game for mobile devices. For only 99¢, you can set your friend up for a nasty scare, sure to induce a sound from their mouths that only their mother could recognize.

Scary Maze Game has challenging levels for gamers to play through, leading their little dot around corners and down long hallways. The game lends a false sense of security, as in the early levels the corners and hallways are nice and wide. Then on the later levels the gameplay takes a turn for the nasty and forces players to squeeze their ball through the passageways if they wish to complete unscathed. Once the little dot touches the walls, look out! The prank is on, watch the faces of your friends as they receive the scare that you have waited all this time to deliver. If by some chance the players make it to the last level without touching the walls, the games forces the scare onto the gamers once they reach the little green square that indicates the end of a level. For that little extra touch, lend your friends your earphones as they play. This makes the game more like the desktop version in the sound department, which is a big plus for the mobile version.

There is some difference between the mobile version of Scary Maze Game from the desktop version. With the desktop version, gamers have the benefit of the surround sound system that most desktops have equipped. On the mobile version, the audio is reduced to the tiny speakers and this may result in the prank being less scary. Also, on the desktop version, screen size makes the image of Linda Blair; taken from the 1973 Horror Classic film The Exorcist, really jump out in the face of the unsuspecting player. In the mobile version, players would have to place the device really close to their face to have the same effect, yielding the face that your friend makes hard to see at the moment of the scare. The Exorcist is a movie about a young girl who lives with her single mom. The child becomes possessed by demons and the mother reaches out to the Catholic Church for help. 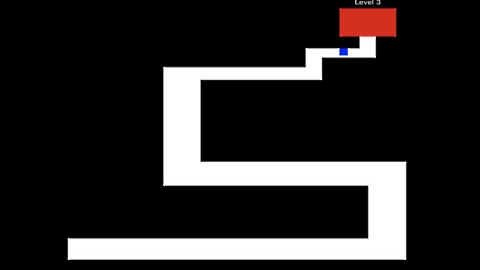 Make no mistake about it; Scary Maze Game is a low budget game. The graphics of the maze itself would make any game proud, that is if the game was made for the Atari 2600, yes, the game is that bad looking. After all, the scary image used is from a movie that was made forty years ago. To make up for this the game developers used interesting sound effects to compensate and somehow found a correct formula that works well for what is intended. The game is published by Halfpeeled, Llc, Geeky Lemon Development, EO Games, and many individual developers and is available on the iTunes store.  Prank away!