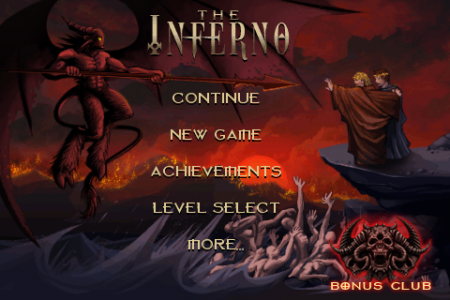 Attaching the word ‘Dante’ to any piece of entertainment suggests that a hellish experience is in store. Consider the risible 1997 Pierce Brosnan vehicle, Dante’s Peak, or the entire filmography of Joe Dante.

Okay, so Gremlins and Inner Space were pretty good.

Regardless of that, you have to say it was a wise move on part of Javaground to omit Dante from the title of its maze-running puzzler – this despite the fact that The Inferno is indeed based on the portion of The Divine Comedy by the fourteenth century poet Dante that carries the same name. 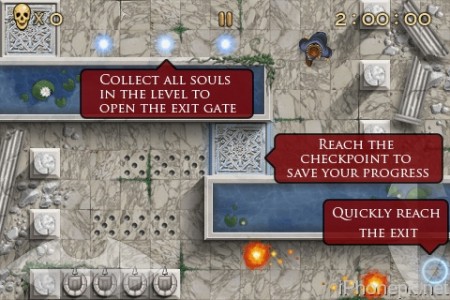 The game – as with the poem – charts the writer’s journey through a mediaeval vision of hell, aided by the Roman poet Virgil. Minus some rather overripe between-level dialogue, however, that’s about it for the game’s literary pretensions.

I rather doubt Dante’s journey involved scurrying about trap-laden mazes and collecting glowing orbs like Indiana Jones, yet that’s exactly what you have to do in The Inferno.

It’s a fairly plain top-down 2D affair, with Dante moving along rather jerkily, one square at a time. The aim of each level is to make your way to the exit, which only opens up once you’ve collected each of the blue soul orbs that litter each level (usually in the most awkward spots).

There’s an overall time limit of four hours in which the game must be completed, your success or failure at which determines the ending you receive.

With such a basic premise, the developer has opted to spread the simple directional controls across the screen. Movement by default is handled via a deconstructed virtual D-pad, with horizontal movement handled on the left side of the screen and vertical movement on the right.

While this two-handed approach would appear to be a wise choice given the lack of any other control considerations, it’s actually unintuitive. In fact, I never found myself entirely comfortable with having to operate two individual controls for simple movement – there’s a lingering feeling of detachment between your thumbs and poor old Dante.

Fortunately, there’s the option to switch to a single virtual control pad, but even this proves to be unsatisfactory given the need for pin-sharp timing and reactions on the tougher levels. Collapsing walkways, patrolling ghouls and intermittent spike tracks invariably lead you on a merry dance of death.

It’s often too difficult and the controls only make it worse. The aforementioned stilted movement and jerky animation must take much of the blame for these frustrations, as the sheer number of untimely deaths you experience begins to resemble a whole new kind of torment.

Still, there’s no doubting the old skool appeal of simply getting from entrance to exit as quickly and efficiently as possible, and the sheer number of levels provides a sizable challenge.

There’s a braveness and a purity to the game’s stripped-back style that proves strangely refreshing – how many digital trawls through the underworld do you know of that don’t involve even a smattering of combat?

Despite the oppressive setting, this is far closer to Edge than Doom. The only trouble is, The Inferno lacks the tightly tactile controls of the former, which are absolutely essential in a game with such a narrow focus.

The Inferno, then, while certainly not a tortuous experience, finds itself in the shadowy limbo of being merely above average.