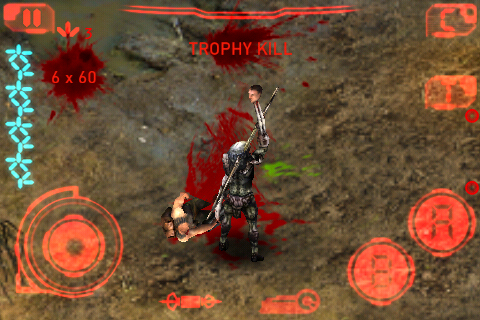 The original Predator movie back in 1987 sparked a huge cult following and a subsequent movie and various crossovers with Aliens. Acclaimed producer Robert Rodriguez is set to rekindle that flame on the big-screen with a stand-alone movie, Predators, with Chillingo and Angry Mob Games stepping up for the mandatory small-screen game tie-in.

Like Guerilla Bob (Angry Mob’s last project), Predators is a dual-stick shooter, though distinguishing itself with a unique focus on melee combat to satiate that staple Predator action. Where would Predator be without the wicked arsenal that we all know and love? Angry Mob Games has taken heed and supplemented the melee combat with his many useful longer-range attacks (such as the Plasma Cannon and Disc Weapon) and sensory abilities too. 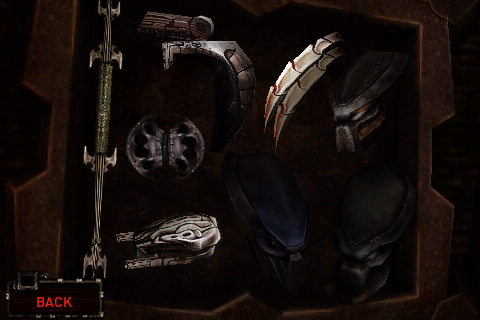 These all come together in arena-like combat scenarios– 24 of them to be exact– where you are tasked with dispatching the supple human prey wandering into your predatory habitat. To begin with, your Predator has only the use of his claws, which are single target shredding machines, and only a single combo. The first few levels operate as an introduction sequence to familiarise yourself with the 6 melee combos at your disposal. Subsequent levels gradually unlock weapons and abilities that are all required to continue.

The Predator’s arsenal provides both the objectives and context for the game’s missions. Some missions require you to use your cloaking device to eliminate enemies undetected; others require you to use your thermal detection to take out sniping enemies. Others again require you to perform particular melee kills, or collect trophy scalps with the trophy kill combo after netting your prey. No matter the task at hand, the Predator swiss-army-knife has a tool to tackle it head-on and with deadly force; and it’s great to see an effort has been made to make each weapon and ability useful. 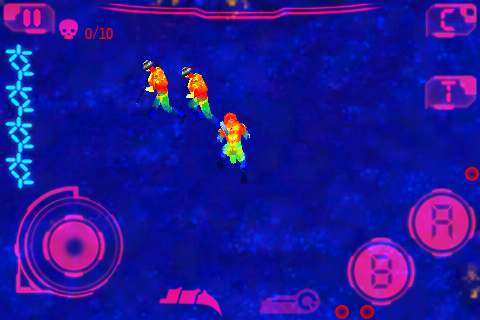 Eventually, you are introduced to the overall targets of your bloody alien party; 8 warriors from Earth deemed worthy of being honorable Predator prey. These act as boss levels, which are unfortunately a low point in the game’s missions– requiring you to monotonously kill a large number of cannon fodder humans to flush them out– and then killing them when they do. Each of these targets has a unique ability to make your job all the more difficult. In subsequent levels they reappear as standard enemies, the end result being that the final levels are replete with enemies sporting machine guns, samurai swords and sniper rifles are all trying to take you down first, adding considerably to the difficulty.

The on-screen controls are adequate to the task, with the dual-stick mechanics functioning as well as we’ve seen so far. Weapons are switched with on-screen buttons, and your limited energy bar (responsible for powering most of your weapons and armor abilities) is represented in the top left corner. Melee combat is where the controls really stand out however, with an A and B button activating a number of different combos and attacks. Pressing B while running for example, will cause your Predator to leap attack; a subsequent B will cause him to Impale your enemy, and another 3 A attacks will initiate the Trophy kill to brutally sever their head. It may sound difficult on paper, but combos and attacks are fluid and easily executed and look absolutely gut-wrenching– pun intended!

On the flipside, the levels themselves in Predators attract our largest criticism. The jungle level at first appears lush and detailed, and though not overly large, suffices for the cloak and dagger gameplay required of the Predator. It is still a glorified square arena however, with clearly delineated boundaries containing what is essentially an open area somewhat reminescent of Minigore. And as in that game, the level does not change at all mission-to-mission. It’s a real shame that one of the strengths of Guerilla Bob– its varied level design– couldn’t be employed by the developers here as well.

The only other issue we had is that the game does suffer from a few minor bugs and graphical glitches that may hamper the occasional combo attack. Predators is also a little light on content, offering only a single difficulty level able to be played through in a couple of hours. Fortunately, the last level to be unlocked also doubles as an endless Survival Mode, in what will undoubtedly be the bread and butter for competitive types.

Throughout the levels, the more difficult kills are awarded with a greater honor bonus, a points system used to upgrade your unlocked weapons. In its current implementation though, honor points seem a little superfluous as we earned far more points than we could spend on a simple run through, and never had to work towards our upgrades. In any case, Chillingo’s Crystal platform is used to record these scores online and to provide a set of achievements for completionists to tackle.

Predators is a faithful rendition of the source material, checking off all the gory boxes to satisfy even the headiest of cult followers. More importantly however, Predators successfully combines fun melee combat, light stealth gameplay and missions acutely based on the Predator arsenal to offer a different and engaging Predator gameplay experience on the iOS device. We only hope that future DLC can introduce more interesting level designs and additional missions to flesh out the existing content.